Rival Titans give Golden Grizzlies their first loss in conference 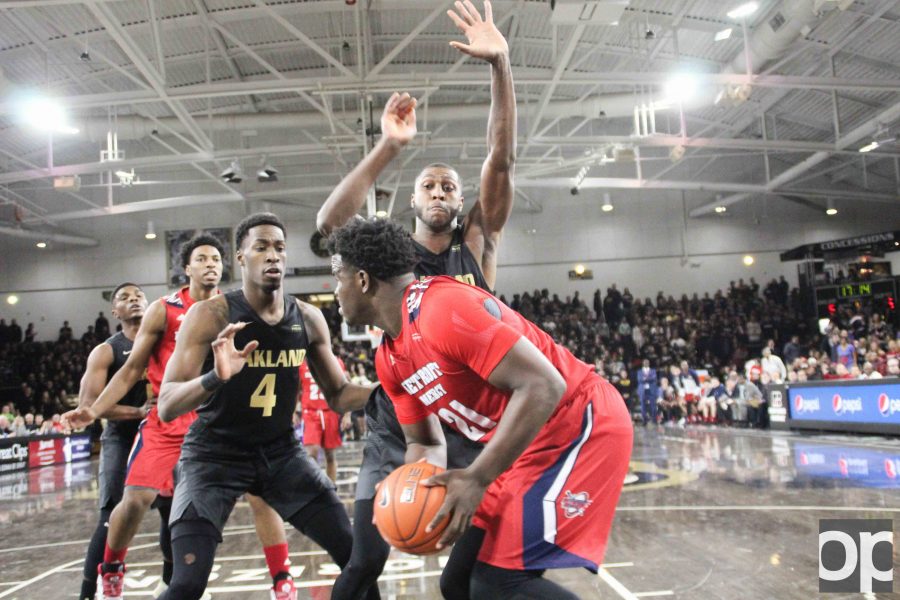 The tension of the Metro Series rivalry rose early this week.  University of Detroit Mercy men’s basketball’s Chris Jenkins boldly predicted to The Detroit Free Press that his last-place team was going to take down the undefeated Oakland University Golden Grizzlies.

To those who only watched the start of the game, this may seem impossible. Oakland was strong at the beginning, electrifying the atmosphere in the O’rena with two early dunks by Isaiah Brock and Sherron Dorsey-Walker.

The Golden Grizzlies rode this energy to a 12-point lead, the biggest lead they’d see all night. Immediately, Detroit Mercy responded with a 13-0 run, regaining the lead with 10:29 left in the first half.

The Golden Grizzlies battled back and headed into the halftime break up 9 over the Titans.

The second half was an all-out battle.  The Golden Grizzlies held the lead for the majority of the second half, but by narrow margins. With 4:58 left in the game, the Titans tied it up at 77.

The teams traded the lead four more times, but the Titans came up victorious as time expired.

The Titans rallied around an unbelievable performance by junior Jaleel Hogan, who recorded his career-high 39 points. Hogan’s previous career high came earlier this season, when he scored 22 points against Northern Kentucky University.

The Golden Grizzlies simply had no answer for the forward.

Brock entered the second half struggling to play with a hip injury from a foul during the first half. Kampe sent Xavier Hill-Mais in to take his place.

However, two missed field goals from Hill-Mais sent him to the sideline and Brock back into the game, visibly in pain.

“Hogan was a beast,” Kampe said. “We just had no answer for him . . . the bottom line is, it doesn’t matter if someone’s hurt, Oakland’s got to go out there and play, and we just could not guard him.”

“[Hogan] is a good player, man,” Hayes said. “Give him credit for being aggressive, but at the same time, we didn’t do a good enough job following the scouting report, taking away his strengths and making him go to his weaknesses . . . We gotta learn from it.”

Absent from the majority of the game was Oakland’s starting point guard, Stevie Clark. The junior has been averaging 22.6 minutes per game, but only saw seven against the Titans.

“I just thought body language and all that kind of stuff,” Kampe explained after the game. “He did not play at the level we need him to play at in the first half, and I decided to go with some other people.”

Kampe put his trust in freshman Brailen Neely instead. Neely scored 6 points, going 1-for-4 from the field, 0-for-3 from three and 4-for-6 from the free-throw line.

“I thought Brailen played good until the last 10 minutes, and then he played like a freshman,” Kampe said. “But I don’t discount Brailen at all. I thought he did a really good job for the circumstances.”

Hayes was the one bright spot in Oakland’s blackout game. He recorded a career-high 28 points for Oakland, in addition to 16 rebounds.

Oakland will get its shot at revenge on Detroit at 7 p.m. on Feb. 10 at Calihan Hall. The Golden Grizzlies will return to the Blacktop at 7 p.m. on Monday, Jan. 16 to take on Cleveland State University.