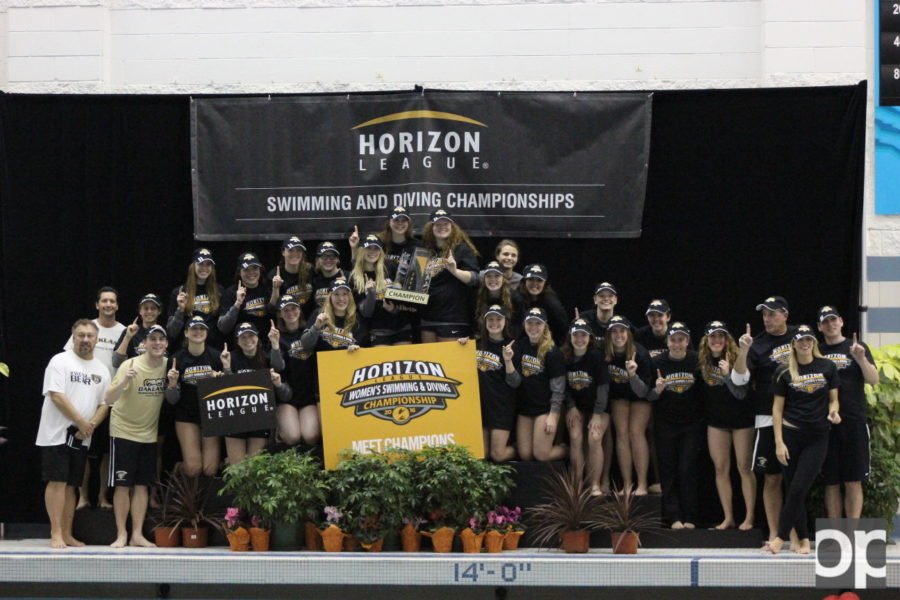 After four days of history written by eight teams, Oakland took the Horizon League men’s and women’s swimming and diving championships for the 38th and 23rd year in a row, respectively, on Saturday, Feb. 27.

In the poolside and stands of the Oakland Aquatic Center, the vivacious crowd didn’t leave disappointed as teams broke a total of 24 Horizon League records.

“Our season is 144 days long and to work to that point, that many days consecutively over a school year like that and hope and pray that everything works out for these four days in February isn’t easy to do,” Oakland men’s and women’s head coach Pete Hovland said. “I can’t say enough about my staff and how hard they work, how long, and to our student-athletes. They are really a special group.”

A highlight: the men’s 400 yard medley relay. Cleveland State and Oakland exchanged the lead a couple of times and the Golden Grizzlies won by only five-hundredths of a second.

Oakland won the men’s and women’s 400-yard medley relays, which contributed 40 points to both teams’ scores.

Brie Hines, a sophomore from University of Illinois at Chicago, was elated to grasp the Horizon League 1650 freestyle record.

“It’s a mile, so it’s pretty strenuous, but I worked all year for it,” she said.  “I wasn’t super happy with all of my races this weekend, so to be able to go out and redeem myself [and] get what I wanted, it’s awesome.”

Fordham and fellow Oakland diver Joe Smith will compete in the NCAA zone diving meet on March 10-12 at Purdue University.

Hovland will be inducted into the Michigan Sports Hall of Fame Class of 2016.

Senior swimmer Nikki Flynn expressed her gratitude and team commitment with tears after the 400 yard freestyle relay, her last race at home with her fellow Golden Grizzlies.

“It was very very special to be able to end my last race with such an amazing group of girls, and they wanted to do it for me,” Flynn said.  “It is just an amazing honor.  I am so grateful for them, and they pushed themselves and helped me push myself for that too.”

She was able to attain three records in the meet. In the 400 free relay, her team tied the conference record (set by another Flynn relay team last December) in the prelims, and broke it that evening.