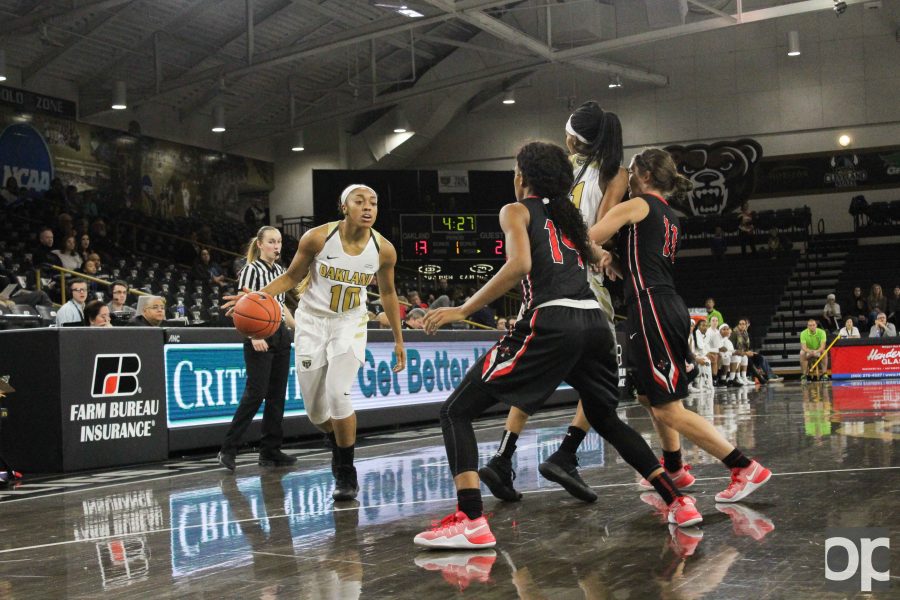 The Golden Grizzlies constricted Concordia the entire game, holding the visitors to just 10 points in the second half. In total, Oakland forced 56 rebounds, 33 turnovers and 19 steals.

Somerfield was first to put Oakland on the board with a 3-pointer from the atop the key. Additional free throws and field goals propelled Oakland ahead to 13-0 with 4:59 left in the first quarter. Michelle Murnen answered for Concordia with a jumper for two points.

Although Concordia sank a free throw and layup in the first minute of the second quarter, Oakland recovered and put  points on the board. The final basket of the Golden Grizzlies’ scoring drive was a layup from Taylor Jones that marked the game 33-11. Concordia scored 11 additional points, while Oakland overshadowed with 23.

Much of Oakland’s success can be attributed to the team’s defensive skill. In the second quarter alone, Oakland had 17 fast breaks to Concordia’s zero. By halftime, the Golden Grizzlies increased the point deficit to 56-22.

Oakland continued to dominate in the third. The Golden Grizzlies made another scoring streak, this time generating 18 points, making the score 74-22. Concordia’s points came in the fourth minute with a layup. By the quarter’s end, Oakland scored an additional five points.

Oakland managed six points before two free throws for Concordia made the score 88-27. A layup and free throw from Bond accompanied by a 3-pointer from Rotzoll put Oakland up 94-27. In the final moments, Rotzoll sunk her second 3-pointer.

Oakland scored five more points for a total score of 99-32.

“We didn’t have the ball pressure we wanted to start the game,” Tungate said. “The first half we didn’t play hard, getting the 50-50 ball or rebounding the way we are capable of. I thought the first half, our defense wasn’t up to the caliber it has been in other games this year.”

Tungate commended Oakland’s efforts in the second half.

“I thought the third quarter, we defended the way we were capable of,” Tungate said. “If this team wants to compete for championships, [defending] is something you have to do for 40 minutes and all game long. Hopefully we learned a valuable lesson on what we need to do defensively, and that will carry over.”