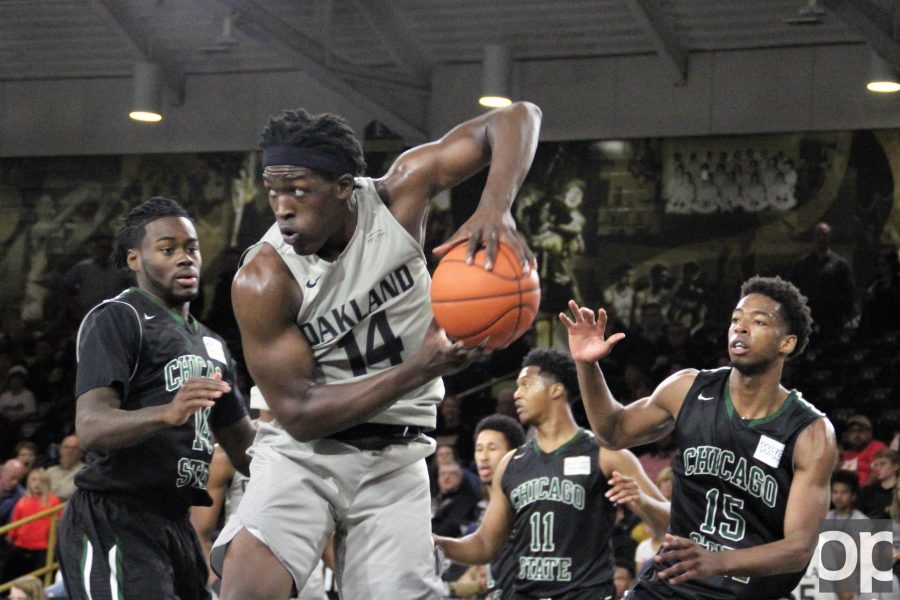 Overall, Oakland averaged a shooting percentage of 49.3 on the field, and an average of 84.4 percent on the line. The Golden Grizzlies also commanded the ball, acquiring a total of 52 rebounds to CSU’s 32.

Oakland was first to score, but CSU responded quickly. Although Oakland led 6-5 at 18:09 in the first half, the Cougars eventually secured a 7-6 lead at 17:37 with a 2-pointer. CSU gathered two more points before Walker responded with a layup and later a free throw that tied the game 9-9 at 16:24.

From there, a 3-pointer from Clark resulted in a scoring streak that saw Oakland cultivate 12 points. CSU, trailing Oakland 21-13, recovered some ground but was unable to overcome the point deficit.

Ultimately, the first half belonged to the Golden Grizzlies, who now led CSU 48-34.

Oakland’s precedence continued throughout the second half. Cycling all members of the team, Oakland head coach Greg Kampe ensured a steady stream of pressure on CSU. This tactic proved beneficial, as Oakland commanded a significant lead the entirety of the second half, concluding the game 107-79.

“We did an unbelievable job tonight on the defensive glass, and that’s an area I’m very concerned about with this team,” Kampe said. “We came into the game with 66 assists through three games. The closest anybody else in our league was 42, and some of those teams have played four games. So we are now 93 assists in four games.”

“We’re close to 70 percent of our baskets being assisted baskets,” Kampe said. “This team is playing as unselfishly as any team I have ever coached. They understand moving the basketball and getting it to the right spots. We’re 4-0, and we’ve never been 4-0 before in a Division I era.”

“Like coach said, we just learn each other day by day,” Walker said. “We know that everybody needs to touch the ball to get going and be the great team that we’re supposed to be. We just have to stay aggressive.”

“Kampe really preached about communicating on defense and making sure that we’re talking to each other,” Hill-Mais said. “In practices, one thing that I can say that is different from last year is that we have 11 guys who are playing hard and want to play. I believe that having these guys push themselves not only helps them, but it helps me be a better defensive player.”

Oakland men’s basketball will play next when they take on Nevada on the road on Thursday, Nov. 24 at 1:30 ET.