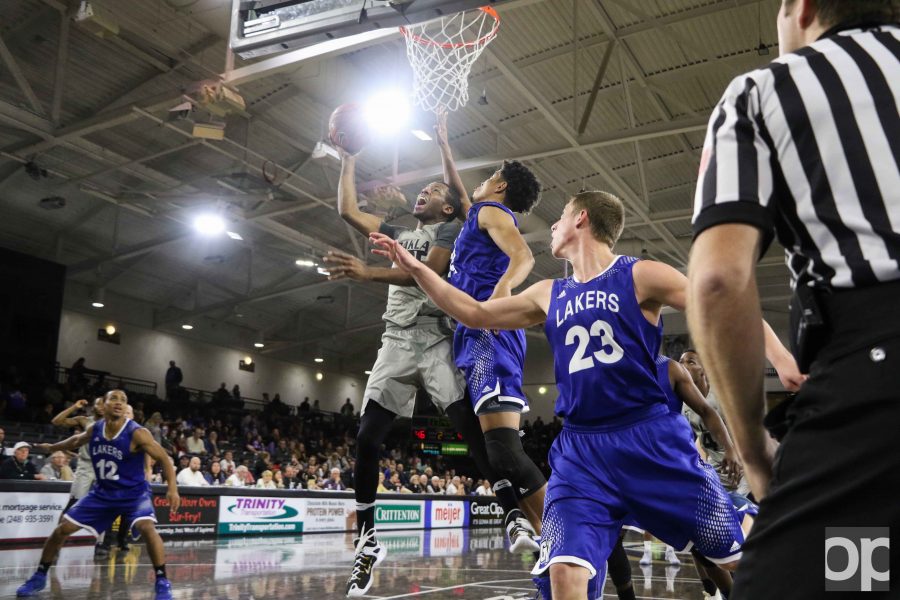 Martez Walker scored 23 points in his 36 minutes of play.

The Golden Grizzlies took down the Grand Valley State University Lakers 98-68 in the men’s basketball exhibition game on Monday, Nov. 7, in the O’rena.

“I thought that this was an outstanding game for us,” Oakland head coach Greg Kampe said in the postgame press conference. “This is what we needed. We needed to get the jitters out, we needed to play in front of people.”

The Golden Grizzlies had a rough start to the first half, losing an 11-3 lead. However, Oakland managed to keep the score at 20-15 with 11:57 left in the first half.

GVSU closed the gap two minutes later, tying the score at 20-20. The Golden Grizzlies and Lakers went back and forth, and Oakland led 41-40 at the end of the half.

Coming back from halftime, Oakland’s offense had changed. The team brought in some of the smaller players to get more speed back in the game.

“In the second half, we went small, made adjustments, and the kids played extremely well,” Kampe said.

Point guard Nick Daniels scored a 3-pointer at the beginning of the second half, and forward Xavier Hill-Mais got some solid assists from guards Stevie Clark and Sherron Dorsey-Walker.

With the smaller players on the floor, many of the Lakers could not keep up or fouled against the Golden Grizzlies. Justin Greason fouled out for GVSU, while forward Jalen Hayes fouled out for Oakland.

The score was 55-51 Oakland with 13 minutes to go. The Golden Grizzlies pulled away until they took the victory at 98-68.

Guard Martez Walker led Oakland with 23 points. He went 9-for-15 from the field, 2-for-7 from the three and was the only Golden Grizzly to play 30 minutes or more.

“One of the things these kids can do is shoot the ball,” Kampe said. “Early in the game, you could tell it was the first game. [We] were missing free throws and things like that. We got going in the second half and played what I thought we were capable [of].”

For GVSU, Trevin Alexander and Luke Ryskamp were both 4-for-8 from the field. Each scored 13, leading the team.

Drake Baar was 5-for-8 from the field and scored 10 points.

Juwan Starks was 3-for-4 from the field and 1-for-2 from the three. He scored seven points.

“It’s what an exhibition game should be,” Kampe said. “I got to play everybody a lot of minutes. We got some good film to look at. We can look at the adjustments that we made, and the problems that we had. So I’m very, very pleased with the game.”

Oakland will face Bowling Green State University at 7 p.m. ET on Friday, Nov. 11, at the Blacktop in the O’rena. Veterans will be recognized, and the first-ever Oakland men’s basketball team will be honored at halftime.