Women’s basketball preview: A fun team on the hunt 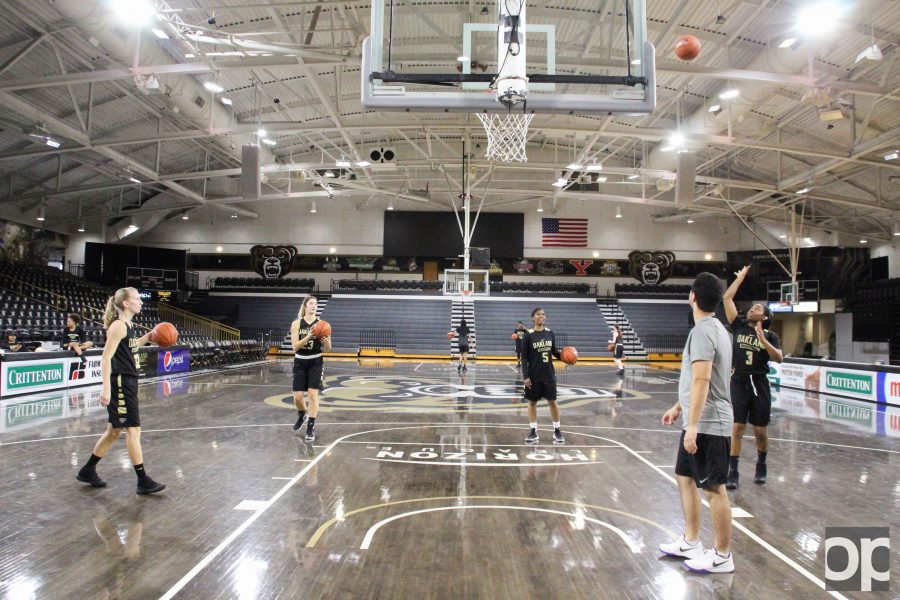 The women's basketball team practices on the Blacktop.

But that’s not slowing down head coach Jeff Tungate, who will begin his fourth year when the team kicks off the regular season at University of Michigan at 6:30 p.m. ET on Friday, Nov. 11.

“I think this is the most talented team we’ve had since I’ve been here,” Tungate said. “But it’s also the most talented our league’s been since I’ve been here. I think there’s probably seven teams in our league that have a legitimate chance of winning the league. Obviously Green Bay has won the league 18 years in a row. They’re 31-3 the last two years in our conference. But, all three losses are to us.”

The Horizon League will see an improved version of Oakland, according to Tungate.

The Golden Grizzlies are going to need that athleticism.

“We’re playing Michigan, Michigan State [and] Indiana on the road,” Tungate said. “Indiana’s the 23rd-ranked team in the country, and Michigan State’s a typical NCAA-tournament team every year. Michigan was in the semifinals of the WNIT [Women’s National Invitation Tournament] last year. We’ll challenge our team early, and hopefully that will prepare our team for conference play.”

The Horizon League Women’s Basketball Championship will be part of Motor City Madness this year, taking place at Joe Louis Arena in Detroit.

A standout freshman guard from last season, Taylor Jones is now in her second year.

“Her attitude’s infectious,” Tungate said. “Everybody rallies around what she does. And the thing that she said at the end of last season, is she said, ‘I’m determined this summer to make sure that I don’t have that typical sophomore jinx’ . . . No one’s in the gym more.”

Jones said her work this summer will be evident when she steps out on the court Nov. 11.

The team played a scrimmage recently and learned a few things.

“We did well defending,” Jones said. “We did well offensively rebounding, but [the opponent] had too many second-chance shots.”

Gleason agrees that defensive rebounding needs to be worked on. She has an optimistic outlook on the season.

“We have the type of girls that like to put in the work,” she said. “We have a lot of encouragement, so it’s very promising.”

One thing is clear, whether it’s Tungate, Jones or Gleason saying it: This team is fun.

“It actually helps us compete,” said senior guard Nola Anderson. “When we beat each other, we still give each other high-fives. We tell each other ‘good game,’ ‘good shot.’ Competing is fun because it helps other people get better, as well.”

Little wasn’t eligible to play last year. Now she is, and Nov. 11 will be her Oakland debut.

They’ve got that mojo.

“We look good,” Little said. “We feel good. We play well together. We love each other. We’re gonna be all right.”

To those thinking about coming to the games, “It’s going to be something they’ve never seen,” Little said.