Men’s soccer gets tournament spot in 5-2 win over No. 2 UIC 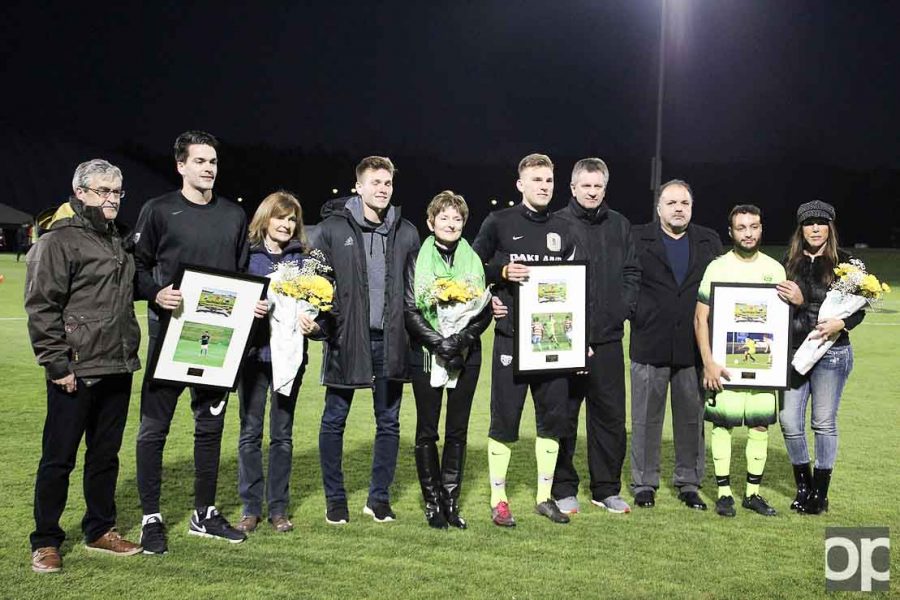 The game netted Oakland a spot in the Horizon League Championship.

“Obviously it’s a big relief,” said Oakland head coach Eric Pogue. “I mean it’s been a disappointing year results-wise, I don’t think that’s any question, but I think we always believed that we were a talented team. We just weren’t putting certain pieces together.”

But the pieces came together Friday. Being the last home game of the regular season, it was senior night. And the seniors had their night.

Midfielders Alex Serwatka and Chase Jabbori traded off the first three goals, Serwatka with two and Jabbori with one. After 49 minutes, it was 3-0 Golden Grizzlies.

“I saw I was on a breakaway, so right before I shot, I picked my head up, and I saw the keeper on the floor, so I just chipped it over,” Jabbori said. “I knew it was in the second I hit it.”

“It’s obviously a dream kind of situation for a senior night against a really high-quality UIC team,” Pogue said. “I’m just really proud that the seniors were able to be the ones to lead us and and give us an opportunity to get back and defend what’s ours.”

But UIC was not to be counted out, coming back to 3-2 over a two-minute stretch ten minutes later. That was a revealing moment, Pogue said.

“Human nature says, ‘Here we go again,’” Pogue said. “But actually, I don’t really feel like it was like that.”

Brendan Woodfull — who was also recognized in the senior night celebration — was injured during the entire season, and said that usually the players don’t stand up on the bench until something happens.

“From the moment the whistle blew tonight, everyone was standing up,” Woodfull said. “When we went down, no one really got too worried, to be honest. Usually, heads would drop, but that didn’t happen. Everyone stayed positive, and it worked out.”

Ultimately, forward Nebojsa Popovic and midfielder Austin Ricci closed out the game in the final ten minutes with two more goals between them.

Pogue had asked his guys to regroup, and it worked, but he said maybe earlier in the season it wouldn’t have. That’s growth, Pogue said.

Oakland’s offense was brutally efficient in the match, putting up five shots on goal and scoring on every one.

“You can’t ask for much better than that,” Pogue said.

Freshman goalkeeper Liam McQueenie spent 90 minutes in the net, making three saves. Ricci and midfielder Alec Greene had two assists, while Strack and Jabbori each had one.

UIC goalkeeper Andrew Putna made no saves in 90 minutes. The Flames outshot the Golden Grizzlies 19-8 on the night, with five shots on goal, as well. UIC got 10 corners to Oakland’s one. Ricci and freshman Nyal Higgins got a yellow card each.

Serwatka went down twice with a rolled right ankle and played 36 minutes total. He said it was better once the adrenaline kicked in.

“I don’t think anybody wanted us to be in the tournament,” Pogue said. “They know the potential this team has if it starts clicking on all cylinders.”