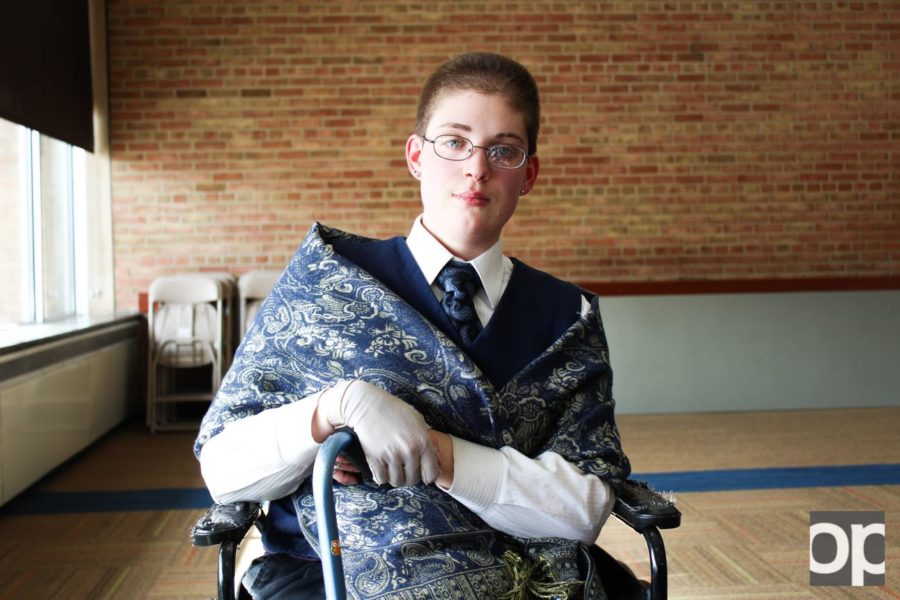 Every morning, Ize Spielman has to pop her shoulder back in place after rolling over to turn off her 4 a.m. alarm.

This is the first of many joint dislocations each day.

“I dislocate joints from laughing,” she said.

She gets ready and drives to OU, where she tries to live as normal a life as possible.

The junior is studying Japanese. But class work isn’t her biggest challenge at OU. Infrastructure is.

Spielman needs a handicapped space with the striped box on the driver’s side so she has room to get out of her car and unfold her wheelchair. She gets to OU around 7 a.m. to ensure a spot.

The delightfully sarcastic 26-year-old has a very rare connective tissue disorder. Everything holding her joints together is weak, so dislocations are normal but painful. If someone shakes her hand or pats her on the shoulder too hard, her bones could be thrown out of whack. Spielman pushes them back into place.

“It’s a disease rare enough that doctors Google it,” she said.

Other doctors ask her how to spell it or treat her like a celebrity because she’s the first person they’ve met with the condition.

Spielman has a hard time opening doors on her own, and not all of the handicap buttons on campus work. She could dislocate something by pulling or pushing too hard or by approaching at the wrong angle.

“Do you know how embarrassing it is to say, ‘I got injured by a bathroom door?’” she said. She later added, “The fact that I get hurt by infrastructure doesn’t exactly give me a warm fuzzy feeling.”

Each time Spielman realigns something, the bones knock against each other, scraping down the edges. Eventually, they will be misshapen.

Another difficulty Spielman faces are the hills.

“Elliott Hall ramp is not an accessibility ramp,” she said. “It’s for launching stuff into space.”

Spielman can walk, but she compared it to someone walking on a broken leg – it’s painful and dangerous. She could dislocate a kneecap and fall, hitting her head or dislocating something else.

It’s not just her joints.

“I am in constant pain,” she said.

She is so used to it that her pain tolerance is enormous. She doesn’t always feel burns and only found out that her foot was broken after mentioning that it was a little sore during a routine shoulder X-ray.

She bruises so easily that her teachers used to worry she was abused at home.

Her disorder also comes with a very high drug resistance and alcohol tolerance. Doctors have a hard time knocking her out before surgeries.

Pain is draining, and Spielman has to worry about classes, two cats and apartment upkeep.

“I always think in terms of energy,” she said.

There’s not much Disability Support Services (DSS) can do, Spielman said.

“It’s not like they’re going to make my legs work,” she said.

However, she has informed DSS of the infrastructure problems.

“When I say I’ve heard it all, I’ve…yeah,” she said of empty promises to repair handicap buttons. Sometimes they’re fixed for a little while but break later.

However, that doesn’t stop people from helping when they can. They open a door or push her wheelchair.

“People who help me are awesome,” she said.

She not only appreciates it. She likes talking about her disorder. If people understand what she goes through, they will be more open to helping her and others, she said.

Understanding and familiarity can be essential. The earlier the condition is diagnosed, the more doctors can help. Spielman cried tears of joy when she was diagnosed at 21. She could finally get answers and proper treatment.

Since the diagnosis, Spielman has stuck with a few doctors – an expert on her condition and specialists who manage pain and injuries.

Spielman likes to make others happy.

“I like making people laugh,” she said. “It cheers me up.”

When a venue is available, Spielman performs a comedy routine that she calls “Ask an Aspie.” Spielman has Asperger’s syndrome, and the routine revolves around how she sees the world.

A little boy in her apartment complex called her “cane lady” or “chair lady,” to his mother’s horror. Spielman thought it was adorable. She likes to do arts and crafts with him and other children from the complex. One boy bedazzled her cane with owl stickers.

In the long run, Spielman wants what most people want.

Fall in love. Adopt some children.

Her next goal is graduate school, where she hopes to get a doctorate degree in macroeconomics.