Staying focused as the semester ends 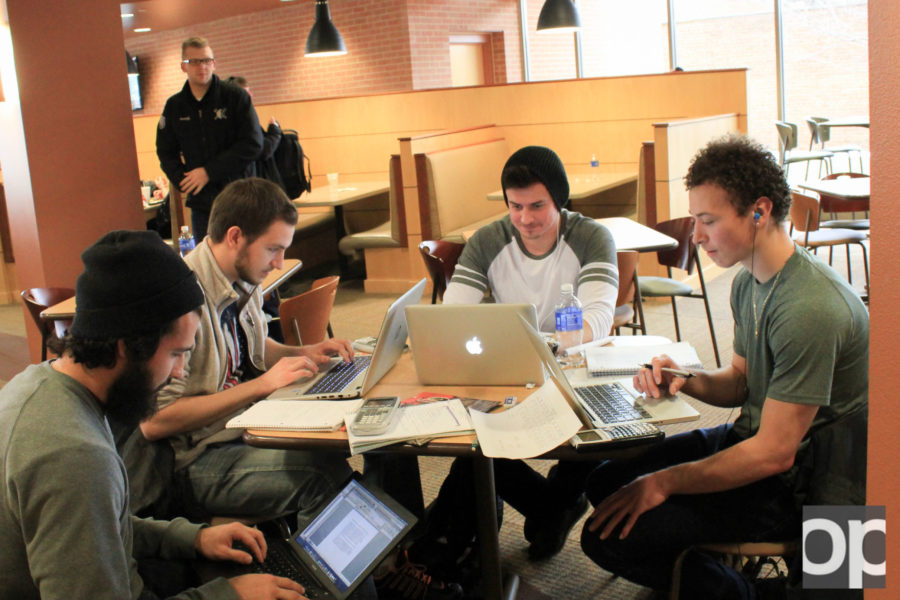 Many students try to avoid a mid-semester slump by studying constantly. Getting plenty of sleep, eating right and maintaining social interaction can help improve grades.

Breaking news: we have now entered the final stretch of the academic year. Finally.

As the weather gets warmer (or stays cold, whatever) and finals get closer, it gets harder to stay in and study or do homework. Unfortunately, the almighty GPA needs the student to study if it is to be maintained.

That being said, here are some simple ways to stay motivated to do school work and keep a positive attitude as the semester draws to a close.

According to Tamara Hew, an exercise science professor, even the smallest bit of exercise can put people in better moods and make them more productive.

“The recommendation is three times a week for at least 20 to 30 minutes,” Hew said. “It doesn’t have to be a long time, though that normally produces a stronger effect.”

Hew said that aerobics, like walking or running, have the best outcome with motivation. She stressed that something as simple as choosing to walk places can help keep people awake and alert.

These are easy to forget, but they can help a lot.

Erica Wallace, the wellness and health coordinator for the Graham Health Center (GHC), said that women often lack vitamin D in their body. So, with recommendation from a doctor, taking vitamin D can help keep people positive. Vitamin C is good to keep on hand as well.

By the way, vitamin D is found in sunshine, so it’s literally like putting sunshine in your body. Enough said.

Wallace stressed that missing just an hour or two of sleep can have a massive effect on how well we function during the day.

If you want to get lots of studying done during the day, get at least six hours at night. It can make a difference.

This one can get hard since lots of college students don’t exactly have a lot of money. Let’s face it, Ramen is cheap.

It’s a well known fact that eating a balanced diet makes people feel better, but Wallace had some specific suggestions.

She said that carbs, like apples, can give you a quick bit of energy. She also recommended proteins, like chicken or almonds, which take a little longer to break down, resulting in a longer-lasting effect.

“Social interaction is really important,” Wallace said. “Have a study buddy or someone to work out with.”

Wallace said that doing things for yourself, like seeing friends, is often overlooked as being a positive force in our mood. She said that making time to do things we really enjoy, like seeing our buddies, helps us get more done.

So keep friends around while you study. They make it easier to do and can often help the time pass faster.

Bonus: something to avoid

Most people like to have coffee or soda during the day. Wallace said that having too much of it is actually counterproductive at keeping us awake and active. Water is better.

She said to especially avoid things like energy drinks or Adderall if you aren’t prescribed to it.

More information on these tips and more can be found on the GHC website.

Some tips from Buzzfeed to stay alive, alert, awake and enthusiastic.

Use as much natural light as you can.Foods that help us produce serotonin, like bananas and eggs, are good for your mood.Get a new hobby.Drink less alcohol, or don’t drink it at all.Drink lots of water.Make it a point to see your close friends.