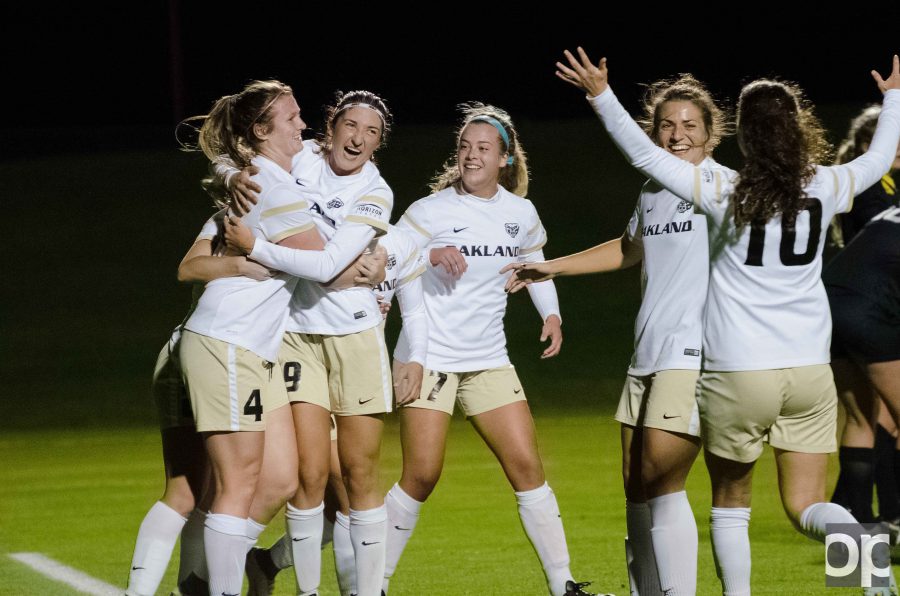 The Golden Grizzlies broke the game open in the first half with a three-goal scoring run spanning just over 10 minutes.

The decisive win solidified Oakland’s No. 4 seed in the Horizon League Championship.

The Golden Grizzlies broke the game open in the first half with a three-goal scoring run spanning just over 10 minutes.

Sydney Duggan was first to find the net, tallying her first goal of the season in the 11th minute.

Palmer followed just three minutes later when she rocketed the ball past Wright State goalkeeper Katie Ruff in the 14th minute. Palmer, assisted by Sydnye Gagner, brought the game to 2-0.

In the 21st minute, Rawson registered her second goal of the season when she headed in a cross from Gagner. The ball barely found the net after deflecting off Ruff’s hands.

Aaliyah Patten seized an opening created by Wright State, drawing Holland to the top of the box. Barreling toward the net, Patten beat Holland in a one-on-one faceoff, reasserting Wright State’s presence in the 33rd minute.

Oakland generated two more chances in an effort to respond to Wright State’s aggression, but both were saved by Ruff. The Golden Grizzlies held the lead as the half drew to a close.

As both teams returned, Wright State worked to narrow the game. The Raiders reconfigured their offense after regaining possession of the ball from Ruff’s save against Palmer in the 62nd minute. Over the course of a minute, Wright State  sent in three substitutions to help even the team’s scoring deficit.

Among the fresh legs was Kelsey Sedlock. Capitalizing on an opportunity, Sedlock ripped a shot that deflected downward off the crossbar in the 66th minute. Sedlock launched the rebound over Holland’s hands for Wright State’s second goal of the night.

“We fought as a team in the end, and that’s what it comes down to,” Palmer said. “Everyone did their part.”

The senior also focused on the importance of concluding the regular season with such a crucial victory.

“I thought it was a great win tonight, everyone really dug in” Palmer said. “Three goals in 20 minutes is crazy. I’ve never seen that this season, and it’s incredible.”

“[I’m] delighted for the girls,” Saurin said. “There was a lot riding on this game tonight, and they took a lot on their shoulders. They performed even with all that pressure on them, and they did a really great job.”

Saurin then focused on the upcoming Horizon League Championship quarterfinals.

“I think the momentum has been carrying for a while now,” Saurin said. “There’s not a huge turnaround after tonight, so we’ll definitely take a break and rest legs. I think at this point in the season rest is going to be just as important as anything we can do. Not just the physical side of it, but also the mental.”