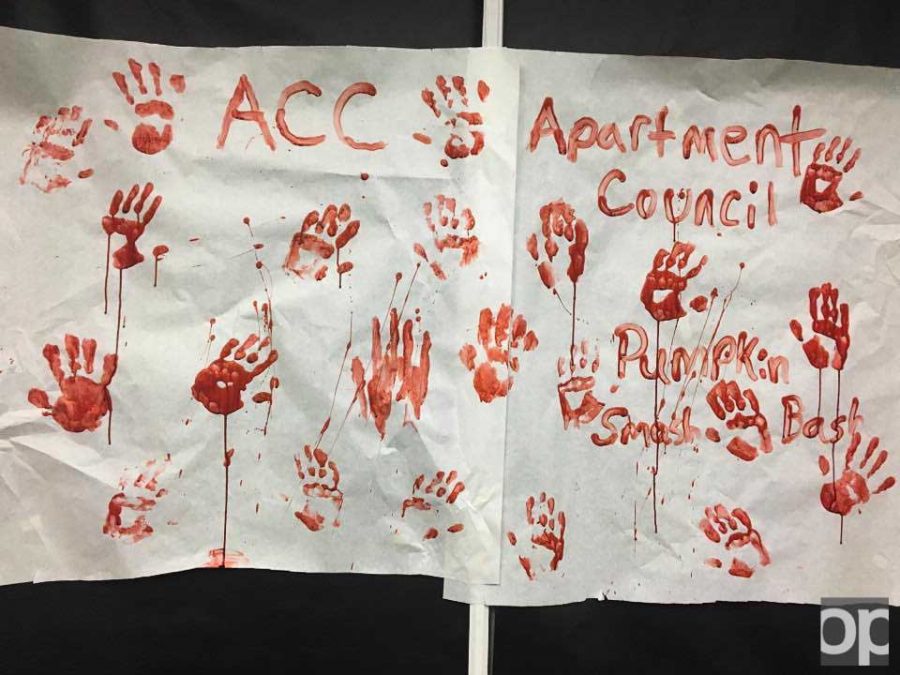 There was music, free cider,donuts, and a caramel apple station at the Apartment Community Council's Pumpkin Smash Bash.

The Apartment Community Council (ACC) invited all students to join in Halloween festivities at their Pumpkin Smash Bash on Oct. 26.

The event was held in the Ann V. Nicholson Apartments 4000s building.

When students entered, they signed in and were placed in a raffle to win Golden Grizzly swag, including sweatpants, T-shirts and hoodies. Around 25 people attended the event and seven won prizes in the raffle.

There was music, free cider and donuts, and a caramel apple station where students could choose from a variety of toppings like sprinkles, chocolate and other sweet things.

“I had a really great time interacting with other residents,” Rankin said. “It is nice to join the community and meet new people. One of my favorite things was the caramel apples. I really loved that they had [a] caramel apple station.”

Payton Holden, a junior biology major who is on the e-board for the ACC, said the board planned the event about a month in advance.

“We wanted to get everyone together to get in the Halloween spirit,” Holden said. “We set up a few games, some for students to win prizes, like the candy corn jar guessing game, and some just for fun, like the pumpkin toss.”

In the pumpkin toss, students threw glow-stick rings and tried to land them around a pumpkin for raffle tickets.

Another Halloween-themed game was called “What’s in the Box?” Players reached into a box with mysterious items inside (fake eyeballs and fake maggots) and had to guess what the items were to win raffle tickets.

“The purpose of this event was to get the community together to just have a good time, play some games and win some cool prizes,” Blackburn said.

The Small Halls and Hamlin Hall hosted more Haunted Halls on Oct. 27, and the week of spooky events ended with the annual Residence Halls Association Zombie Walk on Oct. 28.