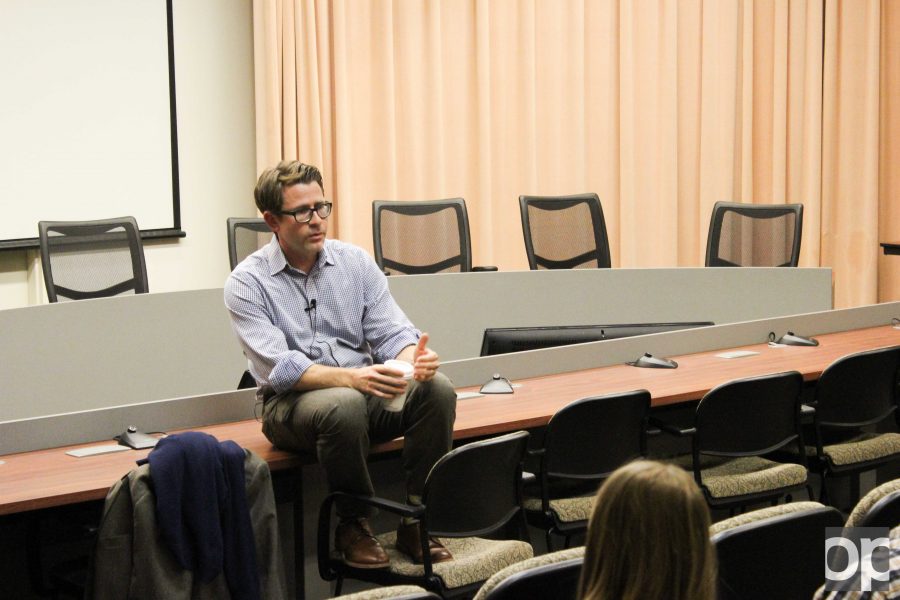 John Stoll of The Wall Street Journal speaks to a crowd on Wednesday, Oct. 26 at Elliott Hall.

Speaking on the state of the automotive industry and the journalism documenting it, an Oakland University alumnus and Detroit bureau chief for The Wall Street Journal gave his thoughts to OU students.

Stoll told of his beginnings in the journalism industry with Automotive News of Crain Communications Inc., a Michigan news organization. But he didn’t give this part of the presentation without expressing how much he disliked cars.

“I was the son of a car dealer,” Stoll said. “I was the only one in my family that wasn’t into cars.”

His story included his experiences writing on automotive business news during the 2008 financial crisis. Business experts across the globe and major politicians followed his stories.

“I was being paid attention to by a lot of people,” Stoll said.

The second portion of his presentation focused on the major competition that Michigan automakers face. The biggest competitors, Stoll said, are the technology giants like Google and Apple that are working to create electronic or self-driving cars.

“They have their eyes on the auto industry,” Stoll said.

“Auto manufacturers are afraid of becoming the next Nokia,” Stoll said.

In the future, Stoll said, cars will be able to remain the same in function while adding technological programming that will provide similar profit margins as those seen by the major tech companies. Right now, he added, that sort of profit is only seen in data from mobile phones.

“The future looks like the car is the new mobile device,” Stoll said.

Finally, Stoll spoke on the state of journalism, a field which may remain behind technological trends.

“As soon as the traditional news outlets catch up, there’s something new,” Stoll said.

Stoll said one of the major problems in media is “a lack of identity in terms of what our jobs are.”

According to Journalism in the Digital Age, a project created by Stanford University journalism professors, the rise of internet use has drastically changed the media.

“The internet has not only changed the methods and purpose of journalism, but also people’s perceptions of news media,” the project said.

Stoll said the most profitable aspect of journalism is the collection of news. This is seen in tools such as the Apple News app and Facebook.

The presentation was organized by the Society of Automotive Analysts, an on-campus organization that tries to provide an opportunity to connect students with “industry news, innovative technologies and networking opportunities.”

The president of the organization, Andrew Steffes, a senior studying operations management and management of information systems, organized the event to try to bring out more than just finance and business majors.

“A lot of people aren’t aware of the opportunities in the automotive industry,” Steffes said.

And as proven by Stoll’s presentation, there are a lot of them.