Gearing up for the future of Golden Grizzly Athletics 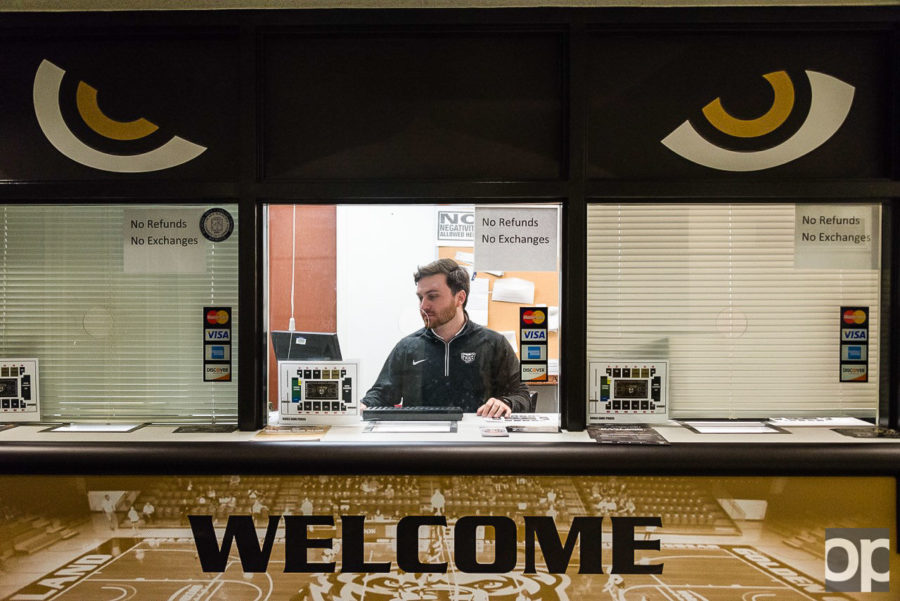 Fleetwood Fleming, ticket coordinator at Oakland University Athletics works on ticket sales behind the ticket window at the O'rena.

Jeff Konya became Oakland’s athletic director in 2014 and has made strides with the school’s event attendance.

“It’s a team effort, it’s a collaborative effort,” Konya said. “The reception from the students has been great and it’s a part of our program.”

Oakland University Athletics does not show any signs of stopping. The school is expanding its horizon after joining the Horizon League.

“We have done some really cool things this year,” Fleetwood Fleming, ticket coordinator for Oakland University Athletics, said. “We have increased revenue and we have increased attendance, which are two of the biggest things we look at, especially in terms of ticketing. All that has increased at a record rate, which is something we are really proud of.”

Oakland University has been setting itself apart from the pack for many years and it reflects through each event the institution presents.

“[Our games are different] by nature of it being an event, not just a game,” Konya said. “Truth is, we need to put events on because athletics is more than just a game. It’s a place where people can gather, a place where people can socialize, where people take pride in their institution…. It’s way more than the wins and losses. Things like Homecoming, Winter Fest, these are opportunities for all of our fans to engage with one another around an athletic event, not a game.”

Fear not, students. Despite record growth in attendance, the free student admission policy does not seem to be going anywhere anytime soon.

“I don’t even think it is well known on campus that student admission is free for students that attend Oakland University,” Konya said. ”The things that aren’t free for students are postseason.  Anything that we have in terms of the regular season we would like to keep and maintain that for students.”

The increase in attendance shows prosperity and growth, two factors that are facilitating Oakland University’s becoming the Horizon League powerhouse throughout this year.

“Students are just the lifeblood of any college athletics organization,” Fleming said.

“Just the energy that they create can’t be duplicated, replicated by any other part of the building, and that goes for all sports no matter what it is. That student energy is so different,” he said. “It’s just the thing that keeps going and it permeates throughout the building.”

While Oakland continues to make their mark in the world of collegiate athletics, the school is not concerned with winning and losing but with creating a welcoming, fun place for student-athletes and their peers to come together and enjoy their time at the university.

He added that the department’s deliverables are to “run everything first-class.”

Without students, Oakland events would not have been the success they’ve been this year and in the past.

“With the student body this year I just want to say thank you to them. They have made a tremendous impact on our game-day experience,” Fleming said. “I challenge them to continue to top themselves.  They have done a great job all year long and I am thrilled to death for that day [the Metro Series rivalry game] to get here to see what they have cooked up.”

The Metro Series returns to the O’rena Friday, Feb. 26, when Oakland plays University of Detroit Mercy. The time has yet to be announced. Watch on ESPNU or ESPN2. Listen on WDFN-AM (1130).