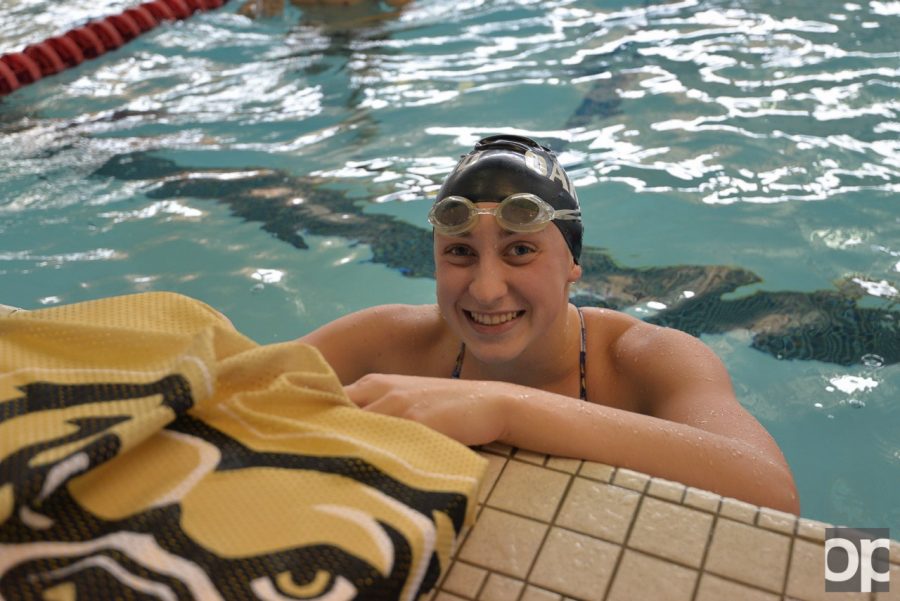 In 2013, the Hamilton, Michigan, native and biochemistry major was informed of a brain tumor that lies on the left side of her head, directly behind her ear. Although the tumor is not cancerous and small in size — roughly a quarter of an inch wide — it was still a discovery that threatened the swimmer’s career.

Initially, it was difficult to diagnose Eding due to the peculiar symptoms she had been experiencing.

“I started having these weird things in my mouth, so my parents took me to the doctor,” Eding said. “The doctor didn’t really know what it was, and she sent me to my dentist to see if there was a nerve problem.”

Unable to attribute the symptoms to dental-related issues, doctors ordered an MRI. When the results came back, Eding was shocked to learn that she had a brain tumor.

“I was diagnosed as a freshman [in high school], so it was hard to deal with at that time,” Eding said.

She was then referred to a neurosurgeon.

“They said that I was actually having seizures in my mouth,” Eding said. “They were scheduled to remove [the tumor], but after taking another look at it, they decided that it wasn’t worth the risk of taking it out.”

The news offered partial relief for Eding, who had been training for the 2013 Girls Division 3 State Finals, where she managed to take second in the 100-yard backstroke in 57.52 seconds.

“My mom was a swimmer, and I started around seven with age-group swimming in the summer and winter,” Eding said. “I started swimming year-round when I was 12. My parents were a really big part and helped me through a lot.”

She also noted the significant role her high school coach, Eric Talsma, had in helping her overcome the obstacle.

“I went through a period of depression after I was diagnosed, but my high school swim coach helped me out of that. He sat me down and told me that I could either beat it, or I could let it beat me, and that made all the difference.”

Eding swims the backstroke, butterfly and freestyle at Oakland. As a Golden Grizzly, she hopes to bring in more accolades for the program.

“I really like the school, I really like the team, and I feel like I fit in very well here,” Eding said. “The academics are really good and it felt like home. I think NCAAs would be a big thing to achieve, so that is always a goal. I’m just training harder every day.”

“For some of the kids like Rileigh that come out of high school, this is a huge adjustment for them,” Hovland said. “This is a process, and I try to tell the kids that.  Don’t expect things right away, because we’re in a very, very heavy training period right now.”

Despite the strenuous training sessions, Eding seems to be acclimating well.

“I think Rileigh, like all the freshmen, is probably wondering what she got herself into, but she’ll adjust and adapt just like everybody,” Hovland said. “She’s got a great personality and work ethic and likes to race. She’s doing great with her teammates and fits in really well.”

Today, Eding continues to combat and monitor the tumor.

“I go in for MRIs every now and then, and I’ve had a few EEGs [electroencephalograms] to track the epilepsy,” she said. “I’m also on medication. I realized that it doesn’t really affect me physically other than the mouth thing.”

Eding’s endeavor has ultimately been a positive experience.

“I think it made me more resilient,” she said. “It made me realize that I can overcome things like that. It’s just a small part of my day, the medication regulates it, and I’ve just grown to live with it.”

According to the American Brain Tumor Association (ABTA), “It is estimated that more than 4,600 individuals between the ages of 0-19 will be diagnosed with a primary brain tumor this year.”

The association also cites brain tumors as the “most common cancer among those aged 0-19.”

Eding hopes to one day promote awareness of the condition.

“I haven’t had much time to look into that, but I definitely would like to,” she said.