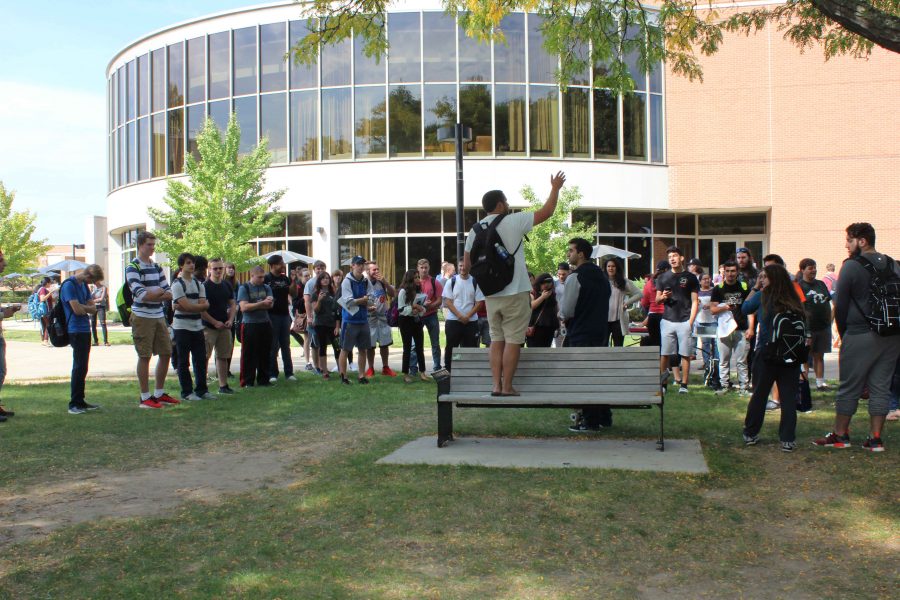 A speaker practices his First Amendment rights outside the Oakland Center.

At some point during the fall semester, Oakland University made significant changes to the Student Code of Conduct relating to speech and expression on campus.

OU’s Student Code of Conduct is “designed to protect and foster the institution’s role and mission by providing students with an exemplary academic experience, encouraging social responsibility and civility within our campus community and protecting the well-being of the OU community.” It does not override OU’s other policies or federal, state and local law.

The extent of the changes isn’t clear as, thus far, Nancy Schmitz (the vice president for student affairs and the dean of students), Victor A. Zambardi (vice president for legal affairs and general counsel and secretary to the board of trustees) and Mark B. Gordon (Chief of Oakland University Police) have all declined requests for interviews from The Oakland Post regarding this matter.

Schmitz confirmed through email that the following policies no longer exist as part of the Student Code of Conduct.

From the “Behavior Policies” section of the Student Code of Conduct:

“Distribution of material and soliciting of any kind by an individual or group are not permitted on OU’s campus without proper approval.  All distribution of printed material, as well as other items, must be approved through the Dean of Students Office.”

From the “Telephones” section of the university’s ordinances and regulations:

At some point after Oct. 10, 2016, both policies were removed from OU’s Student Code of Conduct webpage, as confirmed by cached versions of the website.

When asked in a follow-up email about when exactly the changes were made, Schmitz wrote:

“This was a revision process that has occurred over the past year. The new Student Code of Conduct uses community standards as its basis as opposed to the former system that used the University Ordinances.”

In reviewing the information coming out of both the Division of Student Affairs and University Communications and Marketing, there is no record of OU informing the general student body or faculty of plans to make changes to the Student Code of Conduct or the university ordinances as they pertain to campus speech.

Furthermore, though these policies were removed from Student Code of Conduct within the past month, students and faculty have not received any notice of the changes.

Zack Thomas, president of OU Student Congress (OUSC) noted that the Student Code of Conduct is available online for anyone to read, even though the changes were not formally announced by the university. He also pointed out that regulations for telephones and distribution/solicitation on campus still exist under OU Polices 640 and 415, respectively, which are not changed or overridden by the updated Student Code of Conduct. Students are still bound to these policies although they no longer appear in the handbook.

Thomas said these sections were removed from the Student Code of Conduct because of redundancy.

Thomas, along with Student Activities Funding Board Chairman Jorge Garcia and OUSC Student Services Director Margaret Merogi, was asked to review the changes to the code over the summer. According to Thomas, they communicated their thoughts back-and-forth with Mike Wadsworth, assistant dean of students.

“[Wadsworth] took the initiative in reaching out to us, not the other way around . . . That was something that I was very impressed with,” Thomas said.

It is not clear exactly what spurred these changes in the Student Code of Conduct, as representatives from the university did not offer responses when contacted through email and have declined requests for interview.

“Oakland University periodically reviews its written policies to, among other things, ensure compliance with all applicable laws, including the First Amendment to the United States Constitution.”

Prior to the removal of these policies from the code of conduct, the Foundation for Individual Rights in Education (FIRE), an independent non-profit organization that monitors free-speech policies on college campuses, gave OU their worst rating in regard to campus speech policies.

Azhar Majeed, a lawyer and the director of policy reform at FIRE, explained FIRE’s campus rating system and why OU’s policies scored so poorly.

“The red light rating in our rating system means that the university has at least one policy that is clearly and substantially restrictive of free speech,” he said.

“Oakland University has two red light policies. One of those is the student handbook policy on the use of telephones. This policy says that a telephone or other communication device may not be used to offend or disturb another person, or can’t be used to communicate immoral or insulting language. That’s a pretty clear restriction and it encompasses a great deal of protected speech.

“Similarly, the student handbook policy on discrimination prohibits any language that stigmatizes or victimizes any individual on the basis of listed personal characteristics. A lot of conduct that may stigmatize or victimizes another person may be offensive, but it is certainly protected by the First Amendment.”

What is not yet clear, due to the administration’s lack of response to attempts at contact or notification of the general student body, is the extent of any other changes that may have been made to the Student Code of Conduct.

Additionally, as some of these changes have resulted in the removal of former policies, students may not be aware that they may now exercise their rights as they pertain to speech and expression without violating the Student Code of Conduct, though they are still bound by OU’s other policies.