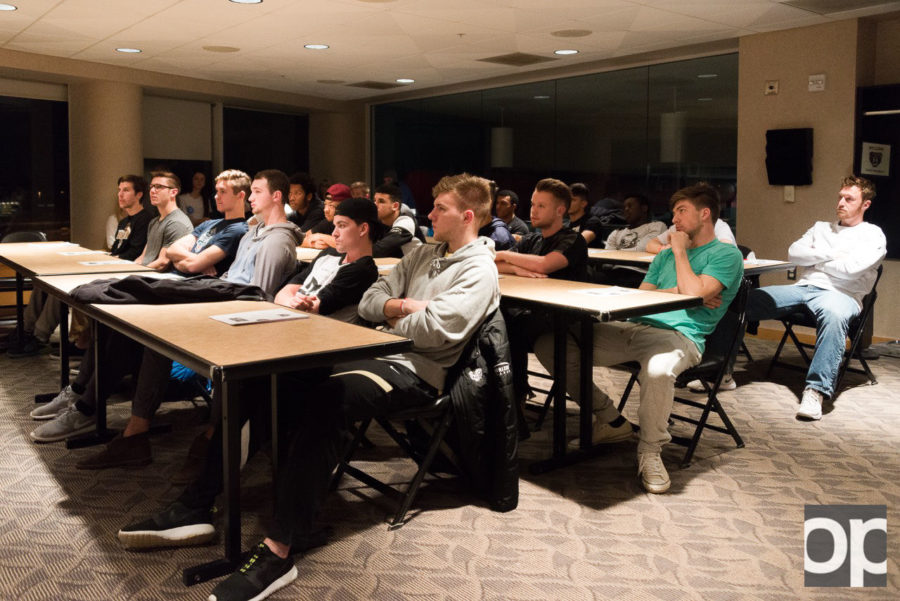 The men's soccer team gathers nearly every Sunday to discuss chapters from the book "Legacy" by James Kerr in order to learn effective leadership skills, sometimes with guest speakers.

“I call it a recalibration of the team,” head coach Eric Pogue said.

He wanted a creative way to orient this season’s team, so nearly every Sunday evening the group meets for an hour or two and discusses what each player can do to be a strong and respectable team member. The meetings aren’t only for building a team, but for building chemistry and a culture.

“It’s not about soccer; it’s more about creating a good team dynamic,” Pogue said. “It’s an opportunity for us to just sit down together and build a winning team.”

“They help us get ideas for what we want to do as a team moving forward,” Popovic said.

The idea sparked when Pogue read the book Legacy by James Kerr, which covers the All Blacks of New Zealand, a successful rugby outfit. It stresses 15 powerful and heuristic lessons of leadership, including sustained success, turning purpose into practice, handling pressure and how to achieve world-class standards, day after day, week after week, year after year.

It asks what the reader’s legacy is.

“The book shaped us as a team, and we are finding our team identity,” junior Brendan Woodfull said.

“You’re always skeptical of how you’re going to do, but having these meetings and training and everything that has happened so far, it seems like we really haven’t lost our touch of a winning team,” Woodfull said.

“I don’t think next year is going to be a relapse year,” he added. “I think we’re going to come out strong.”

At the end of each meeting, Pogue assigns two upperclassmen a chapter to read and share with the team during the next session.

“Getting to see what the pros do and how they became successful, you start getting ideas of what you should be doing to get to that same level one day,” Popovic said.

A guest speaker often attends the sessions. Pogue said he brings in other Oakland coaches, like women’s basketball head coach Jeff Tungate, or someone outside of the university.

Shepard talked about living your organization: loving what you do, embracing your style and uniqueness and surrounding yourself with people you can learn from and ones you can teach.

Pogue said not many people know what goes on off the soccer field, and that these sessions show the work the team puts in when nobody is watching.

“To be able to interact with them more often and get a chance to know them and them get a chance to know me, I think it opens up the dialogue and kind of humanizes everybody a little bit,” Pogue said. “And I think these are the kind of things that make us successful on the field.”

Woodfull believes the meetings are great for the new players because they are able to come in and see how the returning players act on the team.

“It kind of helps mold them into our team,” he said.

Feb. 28 was the first meeting after winter break, so instead of discussing the book, Pogue thought it would be a rewarding and fun idea to give back.

Oakland soccer alum Nicholas Kristock founded Fleece & Thank You, a non-profit that brightens up the days of sick children.

After spending nearly two years playing professional soccer in Australia, Kristock started the organization inspired by Sophie, a 4-year-old girl battling neuroblastoma who he met while volunteering in hospitals in Australia.

“I saw that maybe six out of 20 kids on a floor were getting blankets and 14 kids were having to watch six kids get blankets and say, ‘why don’t I get a blanket?’” Kristock said. “So I want to make sure that every kid gets a blanket every time.”

He said it’s pleasing seeing so many people wanting to help and volunteer, especially at his old stomping grounds. Popovic said it’s great the team was able to help out.

“It’s just always nice to do things like that because it just brings a smile to your face and you know it’s for people who need it,” he said.

Woodfull and Kristock were teammates before he moved to Australia in 2014.

Pogue jokingly said they are guys and they don’t really react to things like this. But he said a person doesn’t fully appreciate the value of this service until they actually participate.

“I think it’s important for them to take their Sunday night to do something important like this,” Pogue said. “It means a lot to me, to the program, to each other and to the young children that get these [blankets].”

“It says a lot about people’s hearts,” Kristock said. “Love is a common thing no matter who you are, what color your skin is, [or your] religion. Everyone wants to love on other people and this is a really easy way to do it.”

Oakland’s next match is at 7 p.m. ET on Saturday, March 12 against Northwestern Ohio (NAIA) in the College Clash at the Legacy Center in Brighton, Mich.