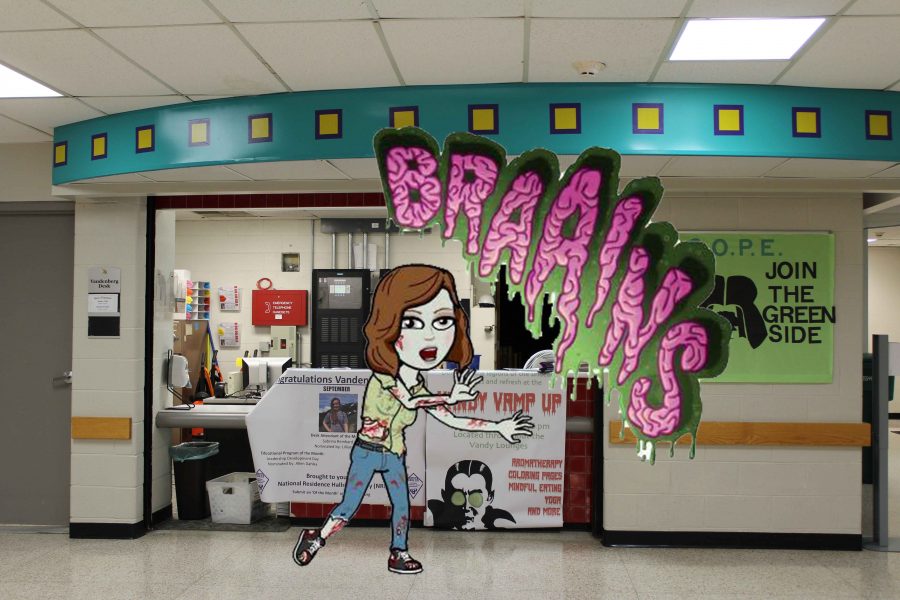 Nightwatch workers come across variety of students during their shifts.

The nightwatch worker slings into his chair. It’s 1 a.m. No human being should be starting their shift this late.

Luckily, he is no human. He’s grown beyond such a puny word. He’s a nightwatch worker, a superhuman.

“I just watched you walk in like a newborn horse. I know you’re intoxicated,” he says under his breath as a student stumbles through the doors.

Another student comes up, signing in a guest. The worker does his duty and asks for the guest’s ID.

“No, you idiot. A picture of your ID does not work under any circumstances,” he grumbles.

The guest is taken aback, but hands over his high school ID.

Those aren’t allowed either. Before the worker can respond to this situation, an alarm goes off.

“Can you not read? The sign says, ‘Do not exit.’ That means ‘Do not exit!’” he screams out in frustration.

The guest leaves the building. The nightwatch worker turns back to his homework.

Desk worker: Not a concierge

The mail desk worker doesn’t get to sit down at first. She comes in, and the first thing she must do is sort the mail and send out emails to residents who have packages to pick up.

Then, she sits and waits for the slew of students to come in demanding textbooks they ordered weeks late.

Instead, surprisingly, an older lady walks in. A mother, it seems. She asks to give the desk worker her son’s medicine, keep it at the desk and call her son down from his room.

“You can’t drop off stuff at the desk. We aren’t a hotel. I don’t know what to tell you,” the desk worker tries to reason with the mother.

The mother just looks perplexed. She doesn’t understand that the poor worker cannot reveal where her son’s room is.

The mother pulls out a cell phone and texts her son over and over. He is most likely ignoring her.

A freshman walks up to the desk and asks where his package is. He says he got an email from Amazon. His exam is today, and he has yet to read his textbook.

“We will send you an email when your package comes,” the desk worker replies. “Please stop asking. I don’t care if Amazon says they shipped it. If you didn’t get an email, it isn’t here yet.”

Bear Bus: The forgotten ones

The Bear Bus driver begins her shift. The bus is quiet. It’s always quiet because no one knows we even have a bus system on campus.

“My favorite thing is when the bus is empty for three hours and it becomes a karaoke bus,” she says with a smile. She turns on her favorite song and drives across a quiet campus. Her shift ends at midnight.

She pulls up to a stop. Empty, as usual. Once in a while, a few people will board the bus and silently nod to the driver.

Her real stories come from the nights she drives the route to downtown Rochester. These journeys produce stories only a hero could tell.

“Don’t you love it when two people start having sex in the back of the bus?” the driver remarks.

Situations presented in this article are combinations of stories told by real Housing workers, and this article is in no way meant to offend Housing employees, who bust their butts trying to make life easier for OU’s residents. All workers quoted in this article were aware that the story would be satirical in nature.