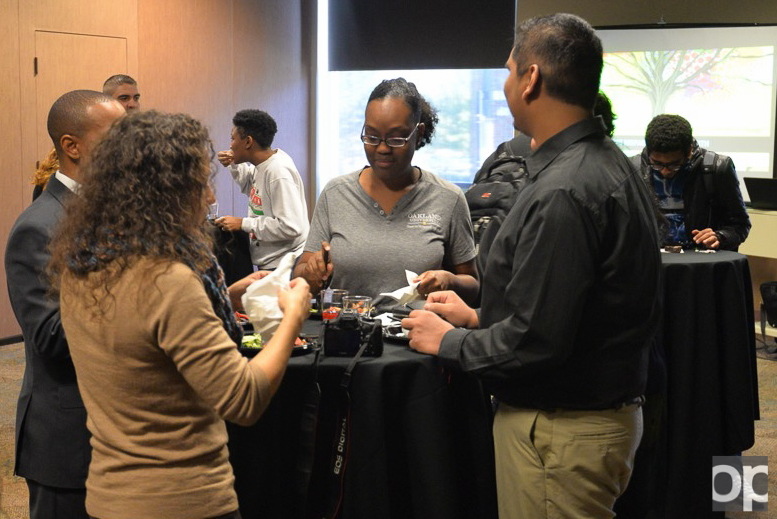 Food was served at the event that celebrated the end of the Hispanic Heritage Month events at OU.

This year’s Hispanic Heritage Month has officially ended. But it didn’t go without leaving a mark on both Hispanic students and the larger community alike.

Hispanic Heritage Month was a series of culturally-themed events that had the goal of educating the campus community about Latin American life. The events, which took place around campus, along with one in Detroit, brought participants to the forefront of current issues in Hispanic culture.

Participants such as Isaias Levi Cruz, a student at Oakland University, found the interest in his culture as an important aspect of college.

“In college, we’re all opening our eyes to different cultures,” said Cruz. “I felt really appreciative of the interest in the situation.”

Cruz paid particular attention to the movie screening of “East of Salinas.” Its ability is to accurately portray the life of children of migrant workers really spoke to him.

“I felt like that was my story,” Cruz said.

According to Payton Holden, a student assistant at the Center for Multicultural Initiatives, the goal of such events is “to open everyone to different cultures.”

The Center for Multicultural Initiatives (CMI) is “the university organization responsible for creating and implementing such events. Their stated mission is to provide support for underrepresented students’ success and to foster a campus-wide appreciation for diversity.”

The CMI also will be carrying out another cultural appreciation event starting on Martin Luther King Jr. Day. The African American Celebration Month has a stated focus on the CMI website.

Anyone is welcome to attend any diversity events hosted by the CMI.