Looking Back: A history of LGBT acceptance on campus 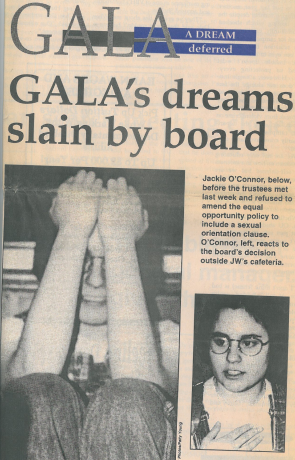 The month of October is recognized in the U.S. as being LGBT History Month, with Oct. 11 designated as National Coming Out Day.

On Thursday, Oct. 13, Oakland University’s Gay-Straight Alliance will host its Coming Out Monologues in the Oakland Center Gold Rooms at 7 p.m. But this isn’t the only way that LGBT history is has been shared on campus since the university’s beginning.

In the fall of 1992, discussion began at OU about including sexual orientation in the Equal Opportunity Policy. At the time, Oakland was one of three Michigan universities that did not include such policy. The other two universities were Northern Michigan University and Lake Superior State University.

In 1993, OU psychology professor David Lowy spoke on homophobia, sharing his belief that homophobia wasn’t a fear as much as it was an “-ism,” like racism or sexism.

The April 14, 1993, issue of The Oakland Post discussed the OU Student Congress’ passage of a policy that would include sexual orientation in the Equal Opportunity Policy.

The next year, on Oct. 12, 1994, the Gay and Lesbian Alliance (GALA) expressed outrage at further delays by the Board of Trustees to approve the OUSC’s proposal. Different student organizations debated whether denying gay and lesbian students access to religious-based organizations was allowed under First Amendment rights of religious freedom.

Sandra Packard, a resident of Oakland at the time, told one GALA student that OU was a safe space for gay and lesbian students. She told students to “come and see” her if they faced problems based on their sexual orientation.

Rex Schlaybaugh, a Board member at the time, asked what other universities’ policies looked like. GALA president Michael Petroni said, “If the university is as diverse as it claims to be, then sexual orientation should be included.”

On Nov. 15, 1994, an ad-hoc committee from the Board of Trustees recommended that no changes be applied to the current policy. Schlaybaugh signed in support of this.

Packard was quoted in the Nov. 30 issue of The Post saying, “The campuses that went first on this [policy[ are getting the lawsuits, we didn’t want any part of that.”

On April 12, 1995, the Board of Trustees shot the proposal down once more with a 3-3 vote, citing a need for more discussion and research. At this point, the fight had been going on for three years.

“They don’t want anyone to know gays go to their school . . . but we refuse to play around,” GALA member Delayne Elyse said at the time.

GALA called other Detroit-based media outlets and organized a march in protest.

In June 1995, the proposal was passed with a 5-2 vote. A March 21, 2004, article explained the coverage offered to OU employees through this act, which included health insurance benefits.

Between when the policy was amended and the first drag show, GALA became the Pride Forum, which eventually adopted its current name, the Gay Straight Alliance. The organization is, thus, as old as the drag show is.