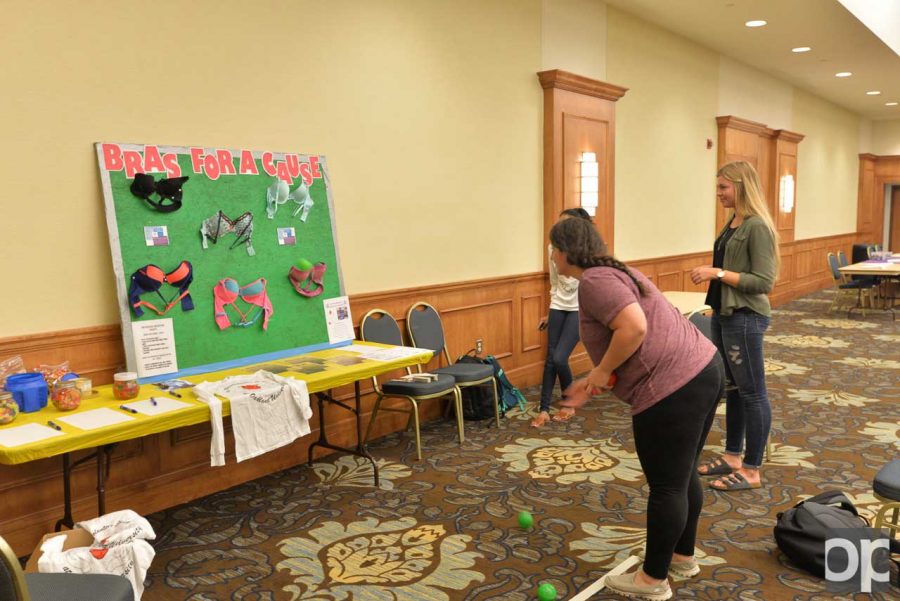 The Pre-Medical Society hosted the Bras for Cause game at the event.

The event provided a variety of entertainment for students, including the Pre-Medical Society’s Bras for a Cause game, the Neurology Club’s raffle baskets, a doughnut-eating contest, Minute to Win It, as well as food and music.

“We’ve been preparing for six months now,” ACS member Jessica Akl said. “We’ve been having a bunch of meetings with Rachel [Scheich], from the American Cancer Society. She helped us plan and find sponsors to help support our event. We have a website through ACS that allows organizations and students from OU to create teams to raise money.”

Joshua Hermiz, another ACS member, explained the difficulty in arranging and promoting the event. Planning took more effort than expected, due to collecting numerous sponsors and engaging donors for a mostly commuter school.

Junior Nicholas Elias publicly shared his experience with cancer and how it has affected his life. Earlier this year, Elias was diagnosed with stage three Hodgkin’s lymphoma.

He explained his experience as not just a physical battle, but a mental battle as well.

“[Cancer] is a life-changing experience. Having this type of event go on is a beautiful thing,” Elias said. “People coming together for a cause — even if it’s just a stranger, knowing that person is supporting you cheers you up. It affected my life in a lot of ways. My health style and my perspective on life drastically changed. I take action and care more.”

Elias described how his diagnosis has affected his loved ones, and his lifestyle.

He experienced a moment of transition from a lifestyle of “being active, outgoing and always smiling, to someone afraid to leave their house.”

That made him realize, “you wanna push yourself to beat it [cancer], rather than just let your mind eat at you.”

Elias is scheduled to have his last chemotherapy treatment on Oct. 10.

Relay For Life Community Manager and OU alumna Rachel Scheich explained how the event gave the Oakland community a chance to come together and fight back against a disease.

Scheich proudly announced that Relay For Life has raised over $2,000 in the past two weeks.

She recommended people educate themselves to build awareness.

“The ACS provides so much,” Scheich said. “Cancer.org is a good source — they can get rides to treatment and can get support where they need it and programs in their area . . . Early detection is key, staying healthy, getting your proper screening. This is a starting point and we can only go bigger from here, [as we] allow students to have this avenue to fight cancer and getting other organizations involved.”

Scheich shared that Relay For Life has been an on-and-off event for the past couple of years at OU, but it is something she hopes to sustain.