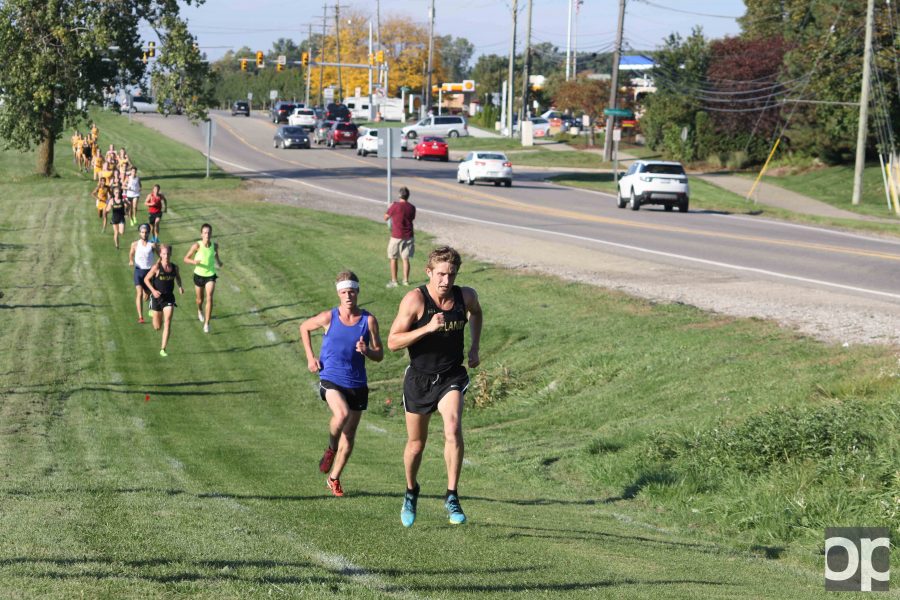 Bryce Stroede of the Oakland University men’s Cross Country comes in first with a time of 18:41.3 for the 6K.

To say the weather cooperated is an understatement. The sun shined as Oakland cross country beat Central Michigan in the Golden Grizzly Short Course race on Friday, Oct. 7.

“I knew I didn’t want to go out first,” Levy said. “I wasn’t sure what the pace was going to be. So I let someone else take it and when I realized I had it in me to go a little faster, I went for it.”

She often doesn’t set the pace right away.

“She will feel a race out a little bit early on, but she’s aggressive,” Oakland head coach Paul Rice said. “She’ll only give it so much distance before she really starts pushing into it. They all kind of have that mentality.”

This was evident in the 5K in the Joe Piane Invitational at Notre Dame on Sept. 30, Rice said. The women were in 14th place at the mile and ended up finishing tied for third.

“They chase each other in practice,” Rice said. “We have a very competitive team.”

“Today, the whole focus was to run better than what we did last week at Notre Dame through the 4K mark,” Stroede said. “Pretty much everyone did that.”

Wuori has been sick the past two weeks, but said that it’s no excuse. He ran quicker than he did at Notre Dame.

“We had one of the hardest, if not the hardest workouts we’ve run this whole season two days ago,” Rice said. “We did hills, and it was a killer workout. We weren’t exactly thinking ‘Let’s go into this one fresh.’”

“They were in the weight room two out of the last three days,” Rice said.

They train for fatigue and back off at the end of the season to take off.

“It’s definitely tough,” Stroede said. “That’s the name of the game, though.”

The idea for the short course came from necessity. The NCAA requires a certain amount of meets per season. But there was a problem.

“We don’t like to race a lot in September,” Rice said. “We like to train hard, take the racing out of the equation . . . So we have to fit another meet in somewhere.”

Rice is friends with Central’s coach, Mark Guthrie, who had a similar situation.

“Would you come down to our place and run a little short course workout type deal?” Rice said. “We’ll run hard, but we won’t make it something that’ll kill our guys and our women, so they’ll still feel good for next week.”

Guthrie was on board. Friday’s meet marked the second annual race.

The Pre-National Invitational in Terre Haute, Indiana, is up next on Oct. 15. The women’s team got regionally ranked at the Notre Dame meet, Rice said, so now the job is to move up. Pre-Nationals has a lot of good teams, so it’s possible there.

“We need to bounce back from last week,” Rice said. “We had three guys that were sick last week in Notre Dame, didn’t race well. They’re starting to come back around. One of our guys coming off an injury [Michael Cox] is going to run the full race next week for the first time.”

“Youngstown’s going to be there,” he said. “They whooped us last week. We’re not very happy about it.”