Erin Kownacki: a story of success and perseverance 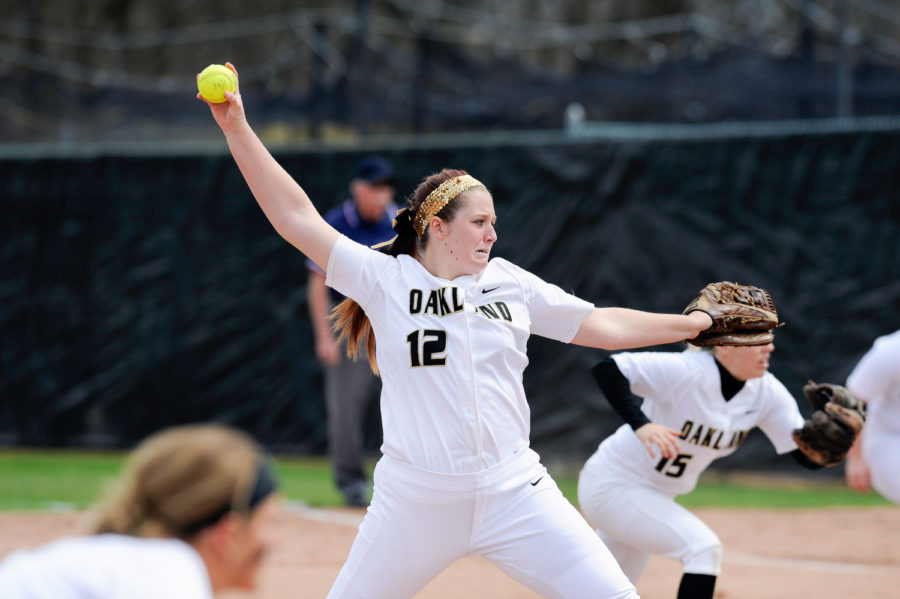 Oakland Softball player Erin Kownacki will redshirt the 2016 season and return next year.

After surviving a blood clot in her brain and promptly returning to athletics, senior pitcher Erin Kownacki will redshirt the 2016 season and return next year.

Kownacki started 29 games and appeared in 31 last season, while attaining an ERA of 2.85 and striking out 101. She was named to the Horizon League All-Tournament Team and given the Pitcher Award after helping Oakland win its first-ever Horizon League Championship.

But come last fall, her world would be thrown for a whirl. Kownacki had an unsuspected blood clot in her brain discovered in October.

“I was looking forward to my senior year, coming back and picking up right where I left off,” Kownacki said. “So, when they told me I couldn’t play, I kind of teared up a little bit. But I know that I should be back by the end of this season.”

Kownacki said the clot has not affected her drastically in the long run.

“I still get some headaches, but other than that, I’m fine,” Kownacki said.  “At first, it was hard for me to concentrate and I basically slept a lot. After I got home, I pretty much slept for at least half of the day. But now I’m completely fine. I’m still on the medication, the blood thinners. Just until they find out why it happened.”

The blood thinners are what keeps Kownacki from actively performing in games and in practices, where she is not allowed to pitch to live batters.

Kownacki felt a lot of love after her hospitalization and during her recovery, including some humorous support from her family.

“My little sister got sick my freshman year [of college].  She was in the hospital for about a week in and out, so my mom was like ‘Really, you’re doing this to me again. Like, c’mon,’” Kownacki said. “But my family [has] gotten a lot closer. My mom and my fiancée actually stayed with me in the hospital all ten days.”

She said university personnel gave some support, as well.

“I wasn’t coherent the first night that I went in [the hospital], but I know that Holly [Kerstner, associate athletic director], Jeff Konya [athletic director], and Marshall [Foley, associate AD] were there,” Kownacki said. “My coaches came almost every day. A lot of my teammates came. Coach kind of gave them a lot of days off of practice so they could come see me.”

Kownacki still plays a position from the sidelines. When she is not keeping track of scores, she gives advice to the younger players who are new to collegiate sports.

“I can’t wait to come back.  I know we’re a young team. A lot of people have been saying that,” she said. “I’m excited to really get to know a lot of the freshman and sophomores better.”

Kownacki is practicing with the team, traveling and working with them every step.

Until Kownacki’s return, keep an eye out for Oakland’s softball squad as they take on the 2016 spring season. The team’s next games are March 11-12  at the Elon Softball Tournament in Elon, NC.