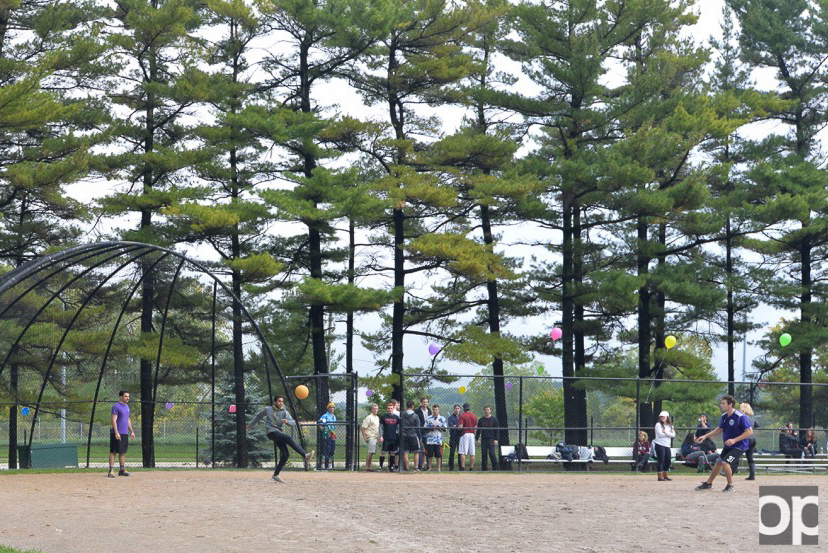 The civic center ballpark was colorfully decorated and full of high-spirited students. Phi Sigma Sigma was ecstatic to receive support from 98.7 AMP Radio, as the station blasted music and set a lively environment. Bean bag toss, football, raffles, food and a semi-championship kickball game resulted in the fundraiser achieving the intention and purpose of the event.

“We raised money for our philanthropy,” Barrett said. “Every player that plays [kickball] donates $10. We do raffle baskets and all the money we do raise is sent to our headquarters, and they distribute it to our national philanthropy.”

Not all service projects involve the national chapter. Three times a month, Phi Sigma Sigma members tutor at local schools. They also raise money for students in Detroit and Pontiac.

“We just started doing this a few years ago, it’s kind of new,” Bricker said. “All the proceeds go to the Kids in Need Foundation, which helps students get school supplies. Most of them go to Detroit or Pontiac. We try to keep it local. To spread awareness, I made a Facebook page, a bunch of flyers and set up a table in the OC. We are trying to make this an annual event.”

The event was filled with amusing, enjoyable moments, and Barrett and Bricker shared their favorite part of the fundraising event.

“[My favorite part] has been the semi-champion game,” Barrett said. “It’s fun to see the fraternities battle it out.”

“My favorite part of this event is having all the Greek organizations and students from Oakland University come and be united,” Bricker said. “Also having fun together and raising money for the kids in need.”

Barrett and Bricker also mentioned Phi Sigma Sigma’s upcoming volunteer events such as Mr. Phi Sigmificant, a male talent show in February. The proceeds from this event will go to the national chapter’s philanthropy efforts.