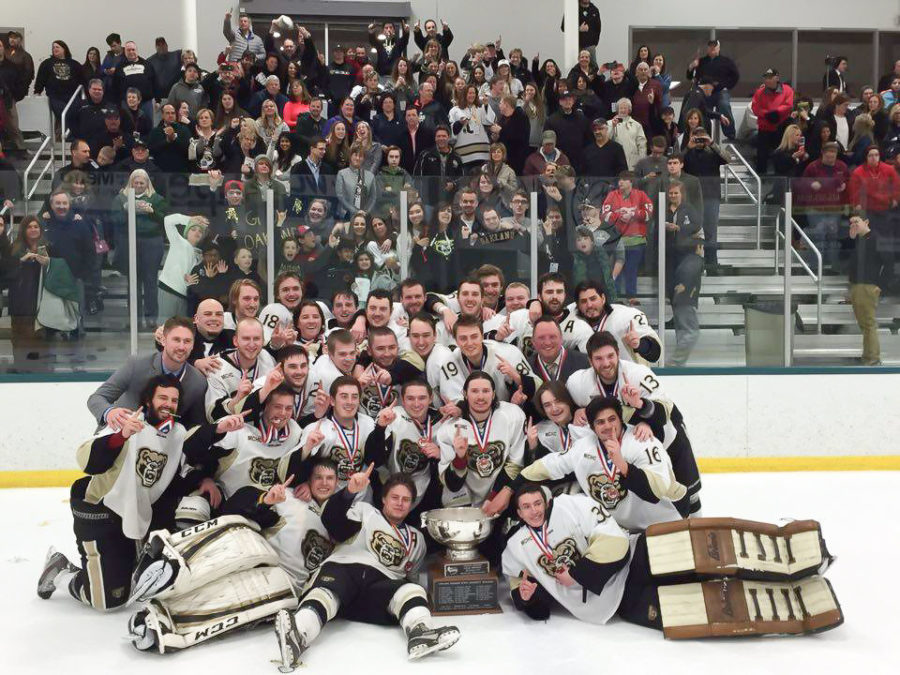 Last season, Oakland lost in the semifinals with about two and a half minutes left.

“[Losing in the semifinals] stuck with [the] guys and I am glad because it stuck with me,” head coach Troy Barron said.  “There were a lot of great moments [because] of the guys’ believing and coming back each year.  That’s what we’re trying to do here at Oakland.”

After being so close last year, they got it.

“All the hard work finally paid off,” senior captain Robert Lauro said. “There are definitely a lot of moments with tough losses and you’re hoping that it’s all going to pay off eventually, but it ended up working out.”

They have formed a bond that helped the championship drive.

“Everybody is in it together; there’s no bickering, nothing like that.  It’s pretty cool,” Lauro said. “Everybody made it possible. There wasn’t one person who didn’t contribute.”

Seven seniors graduate this year. For them, winning the Vezina Cup has been a bittersweet end.

“[It’s] definitely a weird feeling walking out there,” Lauro said. “You’re trying to focus on the game, but at the same time you’re like this is my last-ever first period.”

Coach Barron said they worked every single practice to earn the title.

“If the guys want it, they can do it.  There wasn’t a word I could say or anything to get them to do something that they haven’t done all year,” Barron said.  “They stuck with the process of doing what they needed to do.”

Lauro said his favorite goal of the championship game came when Aquinas had been changing goalies. Just when the alternate reached the ice, one of the Golden Grizzlies made a backhanded, rarely-seen, empty-net goal from defensive hashmarks.

“As soon as that went in it, [we knew] this is not going to be like last year. We’re not going to have that repeat,” Lauro said. “I think everybody knew we were good after that.”

“The final goal was kind of the icing on the cake,” Barron said. “It was a very special moment and these guys earned it.”

“Third time’s the charm,” he said. “You get so close.  …we controlled our own destiny and if we wanted it, we’re gonna get it.”