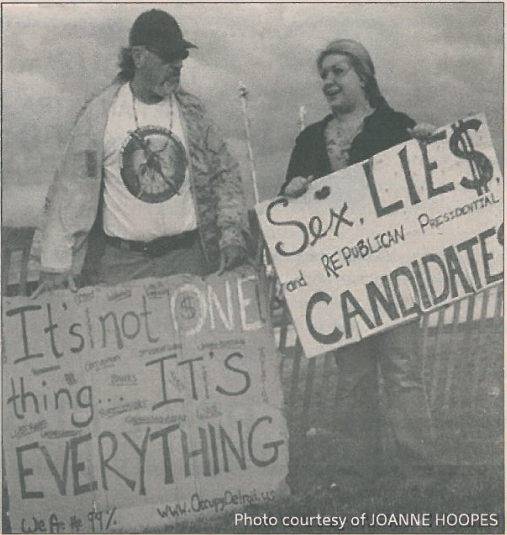 A father and daughter protested the GOP debate held on Oakland's campus.

In 2008, Barack Obama was elected to become the 44th President of the United States. In 2011, when he was running for reelection, Oakland University was chosen as a location for a  GOP debate.

The news broke on Sept. 28, 2011. CNBC and the Michigan Republican Party served as the hosts for the debate, in which eight candidates talked about their perspectives and ideas about  how the country should be run.

The Oakland Post held a Q&A with President Gary Russi on Nov.  2, seven days before the debate.  The Post asked Russi what the school would gain from hosting the event, to which Russi said “Name recognition. There is no question that our goal is to gain visibility, name recognition and gain as many friends as possible”.

The Post reported that 600 students applied to get tickets to the event. Sixty of them were chosen, while another 180 students volunteered to work the event. In total, 1,400 people attended, including 256 media personnel.

The day of the debate, Nov. 9, a group of students and off-campus individuals held a rally for presidential candidate Ron Paul. The event started an hour and a half late. Supporters of Barack Obama stood on one side, while supports of Ron Paul on the other.

Other protest groups, such as Occupy Ann Arbor and Occupy OU, were denied the ability to protest, as there was limited space in the designated free speech zones behind Kresge Library.

At 7:30 p.m., protesters were met with 20 Michigan State Police officers, equipped with body armor and batons. They formed a line on the sidewalk before Pioneer Drive.

That day, 3.3 million people tuned in to watch the CNBC debate, and Russi said that “the event went very well and there were no glitches.”

Candidate Rick Perry stuttered during the debate, which was parodied on “Saturday Night Live” following the event. OU got a shout out during the show’s segment.

Mitt Romney secured the nomination for the Republican Party and about a year later, lost to Barack Obama. Michigan was a blue state.

Continuing Oakland’s political connections, SecHillary Clinton spoke on campus in 2014, along  with Gary Peters and Mark Schauer. The event was sponsored by the Michigan Democratic Party.

Clinton said of OU during her speech, “It’s a beautiful campus with a great reputation.”

At the time, she had not declared her candidacy for the 2016 election, for which she is now the Democratic nominee.