A closer look: Fear and voting in America

Perhaps because of their historically low likability ratings, both Donald Trump and Hillary Clinton appear to want to gin up unnecessary fear in order to win your vote.

As is usually the case with partisan politics, each side has retreated to a respective hot button issue to fear monger voters into action this November.

On the right, Trump and the Republicans seem devoted to making sure everyone thinks that immigrants and refugees are going to kill them, regardless of what the data says.

For example, on Monday, Sept. 19, Donald Trump Jr. tweeted out the following meme: 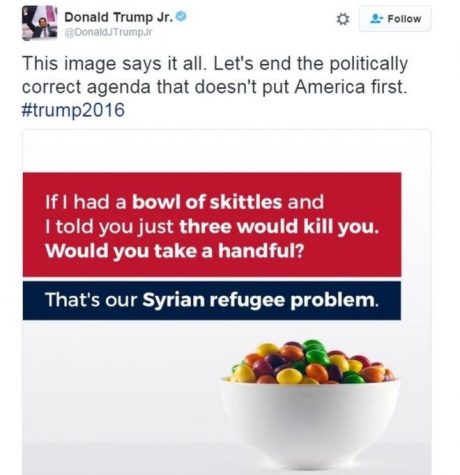 Donald Trump Jr. is on to something with this Skittles analogy; he’s just getting the numbers completely wrong. In the process, he is misleading voters to think the threat of terrorism from Syrian refugees is much greater than it actually is.

In a response to the tweet, Alex Nowrasteh, an immigration policy analyst at the Cato Institute, pointed out the flaws in the numbers relating to Trump Jr.’s Skittle’s analogy.  He wrote:
Social media immediately took up arms to attack him. I think the Skittles meme is actually a valuable and useful way to understand the foreign-born terrorist threat but size of the bowl is way too small. This is the proper Skittles analogy:

Imagine a bowl full of 3.25 million Skittles that has been accumulated from 1975 to the end of 2015. We know that 20 of the Skittles in that bowl intended to do harm but only three of those 20 are actually fatal. That means that one in 1.08 million of them is deadly. It gets even better though. There are over three hundred million Americans and not everyone can get a Skittle. This means that the chance of any American actually eating the fatal Skittle and perishing is about one in 3.64 billion a year during the 41-year time period. Do you eat from the bowl without quaking in your boots? I would.
The glaring discrepancy between the randomly chosen “statistic” from Trump Jr.’s tweet and the actual data regarding terrorism orchestrated by refugees shouldn’t surprise anyone. Trump’s populist campaign has always been about presenting himself as the person who can solve all our problems, even when those problems don’t actually exist.

Of course, the left also has no problem inventing imaginary threats to American life.

Take for instance, Clinton’s attacks against what she calls “the gig economy” (companies like Uber and Lyft). To Clinton, these companies don’t represent a better service provided in a cheaper and more convenient way (in other words, economic progress). To her, these companies that enrich our lives and make urban travel cheaper and more convenient represent a threat—one that needs to be reined in by regulation.

In a speech she gave regarding the gig economy, Clinton said she wants to address companies like Uber by “crack[ing] down on bosses who exploit employees by classifying them as contractors.”

To people like Clinton who are unfamiliar with work outside of government, a private arrangement to work for a particular wage on a basis agreed to by both parties may seem like exploitation, but to the average person looking to make some more money in a flexible and convenient way, jobs at companies like Uber represent economic opportunity.