Down and out in Green Bay: women’s basketball loses close one in league tourney 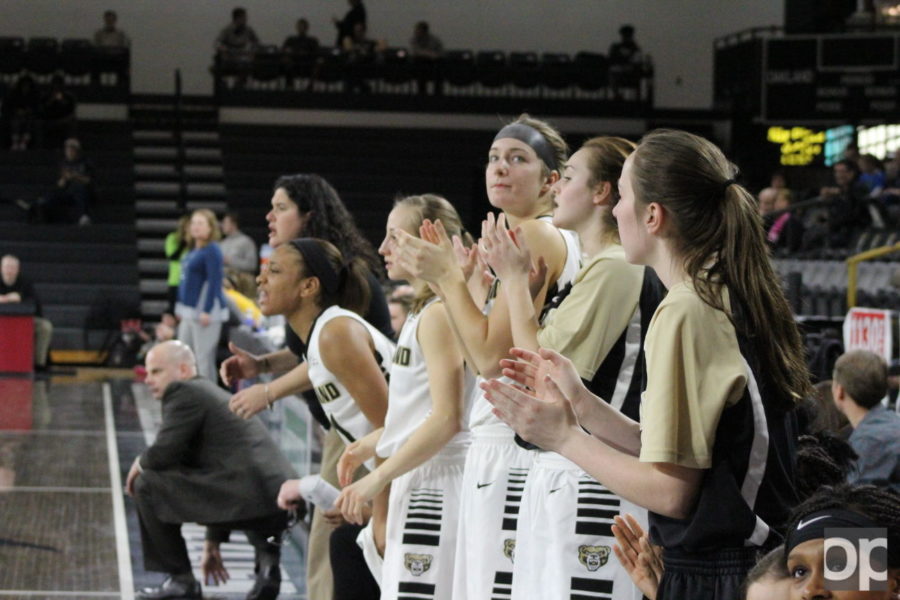 Oakland women's basketball team ended the season 7-11 in the Horizon League as it lost in the first round of the tournament to Youngstown State 63-65.

“I thought we were playing as if all the pressure in the world was on us,” Oakland head coach Jeff Tungate said.

He said the team was trying too hard, but came out better in the second half and played with more poise and composure.

“We just need to relax and have some fun and enjoy the game,” Tungate said.

Youngstown State defeated the Golden Grizzlies 68-64 at the 2014 Horizon League Tournament. At the time, the Penguins were the No. 3 seed.

Youngstown State surpassed Oakland after a 63-63 tie. Janae Jackson, who recorded a team-high 24 points and 15 boards, scored two points with just 2.2 seconds left. Oakland quickly called a time out, and the Golden Grizzlies had another chance to win the game.

Senior Elena Popkey shot her last foreseeable basket of college hoops; a 3-pointer was all Oakland needed to win. The ball bounced twice on the rim, but didn’t fall in.

Popkey led Oakland with 16 points, seven rebounds and three assists to tie the record for the most career assists in program history. She is tied with the 1988-1990 player Ann Serra with 483 total assists.

Also scoring for Oakland was Taylor Gleason with 10 points and four assists.

“Bottom line, at the end of the day you cant go 6-for-18 from the free throw line and win a basketball game, “ he said. “We got the result we probably deserved.”

Tungate thought the team was trying to make its own offense in the first half.

“Everyone wanted to make the play and wanted to be the hero, and do what we had to do to win, instead of letting our offense be the hero,” he said.

Tungate is proud of the team. He recognized Popkey and Olivia Nash as two seniors who have left a legacy.

“I told them that I’ve learned a lot more from them than they’ll ever learn from me,” he said. “We’re going to miss those two greatly, and you know, they had exceptional careers.”