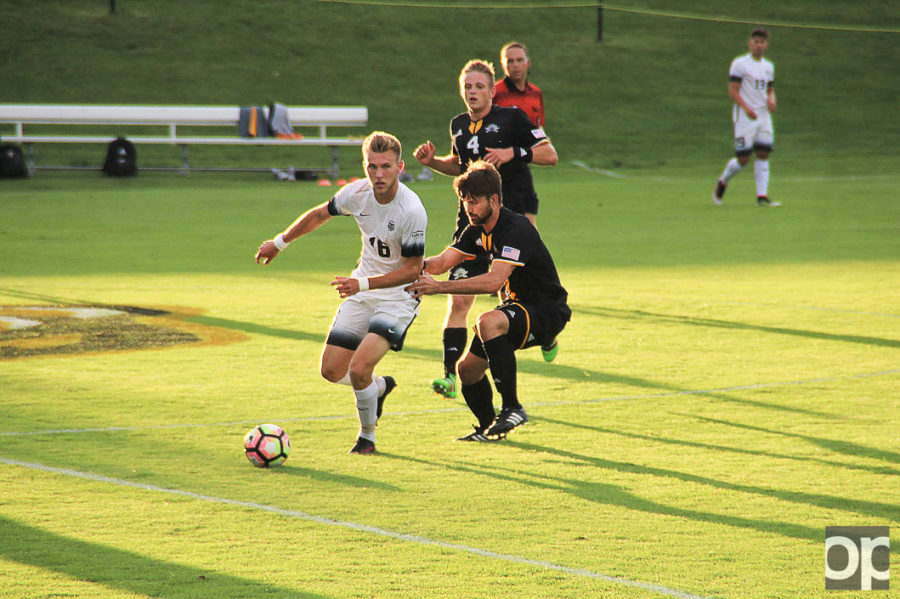 Alex Serwatka scored the game-winning goal in the 2nd minute of the second overtime giving Oakland a 3-2 win in the first league game against Northern Kentucky.

The Golden Grizzlies gave up a 2-0 lead late in the game, but won in the second overtime. Alex Serwatka was the tipping point, making a far-left goal from 22 yards out.

“Kiko [the team’s nickname for Nick Strack] had flicked the ball into the box,” Higgins said in a GrizzVision interview with Mekye Phelps. “He tried to get a goal, so I tried to step out of the way and let the ball go through. But it ended up deflecting off of me. So I took a touch, turned around and I shot it.”

The 2-0 lead lasted until the 82nd minute, when Kobie Qualah of the Norse headed in a goal off the assist from Anders Mathiesen. NKU then scored off an Oakland own goal in the 86th minute. Overtime.

The first ten-minute overtime was scoreless, but not uneventful. There were five shots combined. Ricci fired off two and Spencer Nolff one for the Golden Grizzlies.

Then Serwatka got the assist from Ricci and gave the Norse a quick death in the second minute of the second overtime. It was the golden goal. 3-2 Oakland.

Oakland head coach Eric Pogue said the moments before the late NKU goals were the decisive points of the game.

“You either get the third goal and maybe the game gets away, a little bit easier game,” Pogue said in a GrizzVision interview. “We knew that next goal was going to be important one way or another.”

Pogue gave NKU props for keeping with it, even though a Norse loss was imminent. They kept themselves alive.

“After that we knew we were in for a dogfight,” Pogue said. “Disappointed, obviously, but I don’t want to talk about always being a young team, but that’s what we are. At the end of the day, this will be good for us over the long haul.”

“I was just proud of the guys’ effort in overtime,” Pogue said.

He said the psychological states of the teams were different heading into overtime: NKU was pumped, Oakland was angry at themselves.

“It really takes a strong-minded team to fight through that adversity and find a way to get a result,” Pogue said. “We would have been disappointed with a tie.”

Now comes rest before the Michigan State game at the Oakland Soccer Field at 7 p.m. ET on Wednesday, Sept. 14. You can watch it on ESPN3.