Volleyball in Iowa: a bit of high and low 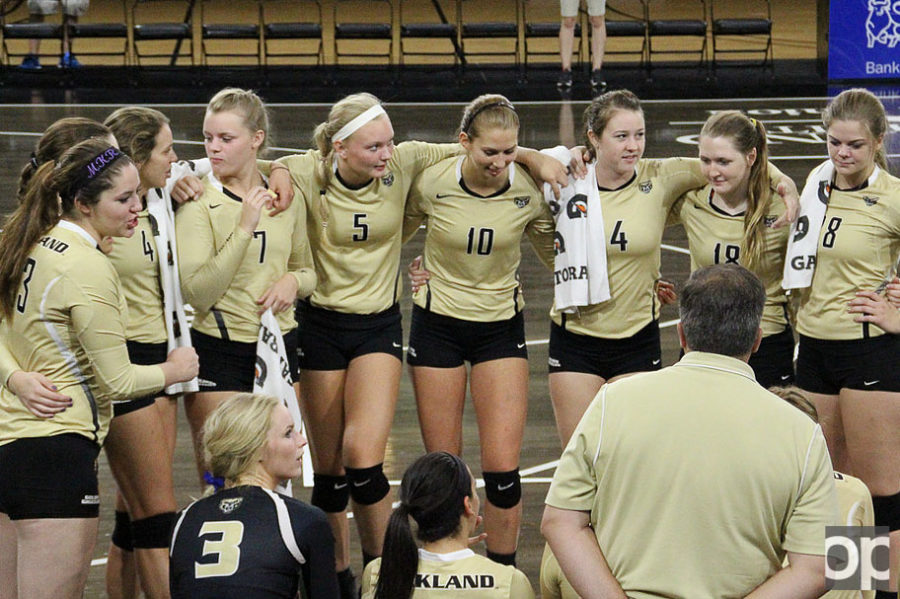 Oakland volleyball team will participate in the Rice Adidas Invite I Sept. 9-10 in Houston, Texas.

The Oakland volleyball team had two very different days during the Hawkeye Classic over the weekend. On Friday, Sept. 2, the team dug deep and came back to beat Butler and Western Illinois in five sets. On Saturday, Sept. 3, however, that magic ran out.

The squad lost to Arizona State in five sets and Iowa in three straight. For Friday’s games, the team first took on Butler in the first volleyball match between the schools. The Golden Grizzlies had to rally several times, and they were up to the task every single time.

In the fourth set, down 17-22, Oakland got eight consecutive points to win 25-22 and force a fifth set. Melissa Deatsch had sixteen kills and Jordan Lentz had 32 of the team’s 41 assists in the match.

“These are really gutty performances,” head coach Rob Beam said in the GrizzVision interview. “We’ve fought through injuries, we’ve had people step up to the plate.”

He said no matter where they were, everyone contributed.

On Saturday, Oakland took on Arizona State, the first meeting between these two squads. The game had the same feel as the previous two: The teams went back and forth until Oakland forced the fifth and final set.

But the result was different. Arizona State jumped out to a 12-4 lead and never looked back. In the losing effort, Sammy Condon and Jessica Dood led the team with 11 kills each, and Jordan Lentz had 46 of the team’s 52 assists.

“I thought our team actually played better this morning than we did the entire first day,” Beam said in the GrizzVision interview.

Oakland then wrapped up against the real home team of the tournament, the Iowa Hawkeyes. This was the fourth meeting between the two teams.

Oakland kept it close in the first two sets, dropping both of them 22-25. The third set would be the proverbial nail in the coffin, a 16-25 loss. Melissa Deatsch and Darien Bandel led the team with nine kills each and Jordan Lentz had 25 of the team’s 27 assists.

“I think that the seven and a half, eight hours of volleyball we played really caught up with us,” Beam said. “I thought we played good volleyball up until the third set, when I think the fatigue really set in.”

Although the weekend ended on a sour note, the team is 4-3 overall and showed a bit of grit in the tournament’s Friday games. Beam said the team can build on the tournament experience.

Oakland plays Rice University, USC and Sam Houston State at the Rice Adidas Invite I in Houston, Texas. The games are, respectively, at 7 p.m. ET on Friday, Sept. 9 and at 1 p.m. ET and 6 p.m. ET on Saturday, Sept. 10.

The Golden Grizzlies play their home opener at 6 p.m. ET on Tuesday, Sept. 13, against Western Michigan.