Felder’s camp a homecoming before Cleveland 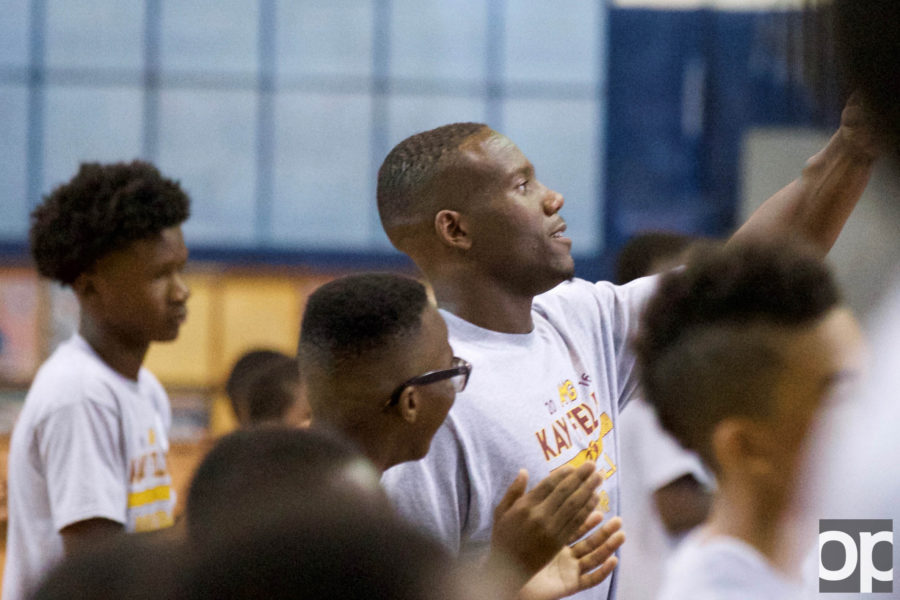 Kay Felder made a hundred new fans on Saturday. That is, if they weren’t already converted.

It seemed like everyone he’d ever known, and all the many youngsters who wanted to know him, showed up. A hundred kids started warming up at 9 a.m. for four hours of instruction and demonstration from a variety of coaches, including Oakland’s Nick Daniels, Sherron Dorsey-Walker and Jalen Hayes.

After the warmups, Marcus Webster, executive director and co-founder of REACH — an after-school program in Detroit where Felder played basketball — brought the man of the hour to the front of the crowd.

Felder stepped out with a slight smile on his face. He had every reason to. It wasn’t just because he’s in the NBA, a dream of his since he was three. Saturday was a sort of homecoming for the 5-foot-9 guard.

“He was in my gym every Saturday morning,” Webster said.

They’d practice in St. Rita’s Catholic Church at State Fair and Hawthorne and go to camps every weekend. Now it was Felder giving the camp.

Webster said Kay takes after his dad, Kahlil Sr., who Webster also coached. Even though he was known as Lil’ Kay, the same toughness and competitiveness blossomed as the son grew up.

Or really, no difference at all.

“This is the first time I’ve seen him since he got drafted,” Webster said. “I’ve just been telling him all day: Kay, man, NBA? He’s like yeah. I said, you look the same. He’s like, I am the same, coach.”

He’d made it, but he was still a familiar face.

“That’s our theme,” Webster said. “I said, if I ever walk up to you and say Kay, you’ve changed, then something’s wrong. What got you there is what I want you to keep doing.”

And Webster would know what got him there. He watched Felder all three years at Oakland.

“I knew he was going to have a chance,” Webster said. “It was just a matter of the right situation. He got lucky, but like I told the kids today, the real part about being lucky is when that chance comes, that you’re ready to take advantage of it.”

Felder was. Oakland got to (and now maybe Cleveland gets to) enjoy the fruits of the now-21-year-old’s toil, but the flash and bang of Kay’s floor magic has a laborious lineage stretching back years. The camp brought representatives from all eras of the Golden Grizzlies’ wonder kid, who’s now entering a new era.

Quincy Acy has been there before. The Mavericks small forward and fellow client of agent Mike Silverman was drafted by the Raptors at 37thoverall in 2012.

It’s just the environment, he said. Comes with the job.

“I’d just tell him stay grounded, stay in his lane,” Acy said. “Don’t try to compete with anybody as far as off-the-court stuff. But he’s a good kid, and I know that. I’ve been with him all summer. He comes from a great background. He’s got a good base, and I think he’ll be alright.”

“He works,” Acy said. “When we go up to the gym at night, he’s doing the little details to correct his shot. Stuff like that. Everybody doesn’t do that, especially at that age.”

“He tried to make it as fun as possible,” Canada said. “I know he enjoyed himself. Still smiling.”

Felder’s been working out with Canada since the seventh or eighth grade.

“I remember when he didn’t work as hard,” Canada said. “He’s always been a talented guy. You can’t take that from him.”

But he forged his abilities into NBA material.

“His humility is like none other,” Canada said. “I think those things have been strengthened.”

And even though he’s Cleveland-bound, Felder’s roots will always be in Detroit. They’ll always be that portrait of a hundred hopefuls in a sweltering, high-roofed gym.

“He’s one of them,” Canada said. “He came from where they came from, he’s part of the city like they are.”

The day wasn’t just about basketball, Canada said. Do what Felder did anywhere and you’d be hard-pressed to find a better way.

Now Felder’s just got to continue being Felder.

“It ain’t over,” Canada said. “You might hear your name on the roster, you might even get some minutes, but it ain’t never over.”

Oakland fans will remember the mini heart attack in early April when they learned Felder had said no to a senior year and instead decided to sign with agents and shoot for the pros. Those agents – Mike Silverman and Brandon Grier — remember the event as a much more deliberate process. They expected him to make it.

“We knew Kay was an NBA player,” Silverman said. “I’m personally excited, now that we’ve gotten past all of the pre-draft and the draft and the contract, just to see how he grows as a man and develops his identity and becomes a part of this Cavaliers team.”

The next hurdle is training camp.

“There will be a lot of opportunity on the table,” Silverman said. “It’s kind of up to how prepared he is. We’re doing our best to have him training and taking care of his body and making sure that he’s ready mentally and physically to go and compete for minutes this year.”

Felder has got to get used to LeBron James and Kyrie Irving.

“At Oakland, he always had the ball in his hands,” Grier said. “Those guys will have the ball in their hands more. He’ll have to adjust his game and learn how to play off the ball, find different ways to impact the game.”

Grier, who has known Felder since the seventh or eighth grade, said Kay hasn’t changed. He also said that going pro has not made him content.

“He’s still got a chip on his shoulder about where he went in the draft,” Grier said. “He wants to show all those people that passed up on him that they made a mistake.”

The big question, even on that fine Saturday, was: Will he?

“I wouldn’t bet against it,” Grier said.

“I seen this a long time ago,” said Dejuan Sewell, Felder’s godfather. “I’ve been there since he was in diapers. He worked hard. He used to be in the backyard playing by himself and you’d think there was five people back there.”

Maybe Sewell wasn’t the only one who saw the future back then.

Felder’s former teammates and current Golden Grizzlies wish him nothing but the best.

“Words can’t even explain how happy I am for him,” Martez Walker said. “We’re going to miss him being there.”

It’s his fight and leadership that Walker remembered.

“We learned from what he was doing,” he said. “Just take that and build on it.”

He wants Felder to do his new job well.

“Make everybody else proud,” Walker said.

“That’s our brother,” Jalen Hayes said. “Happy for him.”

But who’s going to dish you now?

“I don’t think no one quite like him,” Hayes said. “But we’ll still be good. Nick will take over the point guard role, and we got other guys. So, we’ll be alright.”

“I came on a visit,” she said. “He saw me, so he got my contact information, and he was basically telling me you definitely need to come to Oakland. It’ll be a good fit. It’s not too far from home. You could always go home for a home-cooked meal.”

Felder also told her about the scouts. If you’re good, he said, don’t worry. You don’t need to go to the Big 10.

“And actually, he was right,” Jones said. “Look at him now.”

She wants him to keep being the guy he was at Oakland.

“I remember him training before a game, drenched in sweat.” Jones said. “He’s just a hard worker. That’s all I can really say about him.”

Michael Dickerson, one of Felder’s brothers, said the camp is like a going-away party.

“It’s the last event of the summer before it’s time to get serious about basketball,” he said.

Kay hasn’t changed, he said. Then he corrected himself: He’s actually even more humble since being drafted.

When Kay leaves for the upcoming season, things won’t be too different between Dickerson and Felder.

“We communicate daily, so there’s going to be no lost love,” Dickerson said. “It’s just a normal day in the office for us.”

For Tiffany Burnette, Kay’s mom, the necessary travel won’t be anything new.

“He’s been doing that since he was eight years old,” Burnette said. “Now, the trips are longer. But it’s okay. Cause I know he’s doing what he likes to do. It’s okay. We’re only a phone call away from each other.”

She said she begins to miss him after two weeks.

Her grandson walked up. He was asking about a nearby basketball. Was it his? It would be at the end of the day. They got to keep them.

“I don’t think he really realizes the position that he’s really in,” Burnette said. “Of course he knows he got drafted, but I still don’t think, I don’t think I even feel it yet.”

People know she’s Felder’s mom. She doesn’t really know what to make of that.

“It’s not about the superstar status, or anything like that,” Burnette said. “We just living life.”

Felder was seven when he asked her what house she wanted if he made it to the NBA.

“I gave him just an off-the-wall house, like I want a four-lane bowling alley,” Burnette said. “He was like that’s it?”

But she never thought about the NBA back then. What tripped her up was what tripped everybody else up and still may: He’s short.

“I figured he’d go to school four years, graduate, go overseas,” Burnette said. “But God had something else planned.”

She doesn’t know if she’s getting that four-lane bowling alley.

“I don’t know what I’m getting,” Burnette said.

But twenty seconds later she was getting tears in her eyes.

“Why are you crying?” her grandson said.