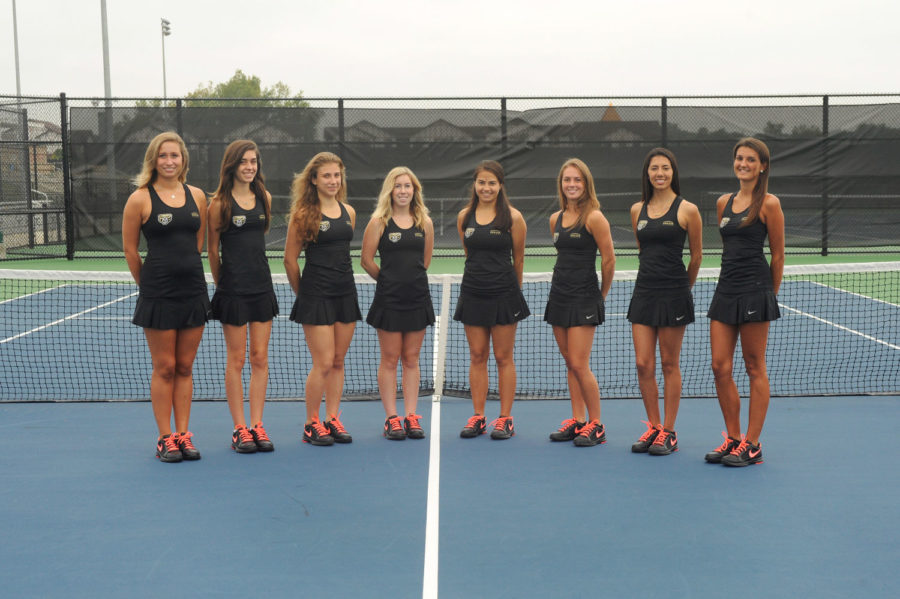 Tennis team will begin its first league math of the 2016 season on March 26, and its first home match on April 2.

Oakland’s women’s tennis (6-4) has been off to a good start.

“Last year was the first year to make it to championships,” head coach Heather Redshaw wrote in an email. “This year we want to win matches when we get there.”

Redshaw explained that the team has been “working very hard on their philosophy of doubles play.”

“It is imperative to start out every match with a 1-0 start before the singles play begins.” Celis wrote in an email.

“At the beginning of the season our confidence in singles play was lacking,” Redshaw wrote, “but after our trip to Florida the girls have shown tremendous improvement during their singles play.  Everyone on our team has improved their overall records in singles to the positive.”

“We have won four out of [eight] of our last matches 7-0. That is a definite improvement in our singles play,” Celis wrote.

“Our team attitude on the court has become increasingly improved over the last seven matches,” Celis wrote. “We have increased our enthusiasm and team swagger, which is very important for conference play.”

Redshaw is looking forward to the first weekend of Horizon League play and hopes to come out of it with a 2-0 record.

“We are hoping the upperclassmen on this team will finish their college careers with the best season of all,” Redshaw wrote. “We have five seniors in the lineup that are hungry for a championship.  I believe they are working extremely hard to fulfill their goals of having the best season thus far.”

“We train three times a week in the weight room at 6:30 a.m.” Celis wrote. “We practice daily with drills and match play. Everyone works extremely hard both in season and out of season to produce good results during matches.”

Redshaw believes Oakland is different from others in the conference.

“We have become a very unified force; our team dynamic is extremely tight,” she wrote. “We have worked hard this season on team building activities that really have shown to be paying off.”

Horizon League play begins with a match at Green Bay at 3 p.m. ET on Saturday, March 26.

The Golden Grizzlies play their first home matches of the season at 3:30 p.m. ET on Saturday and Sunday, April 2-3 against Cleveland State and Youngstown State, respectively.