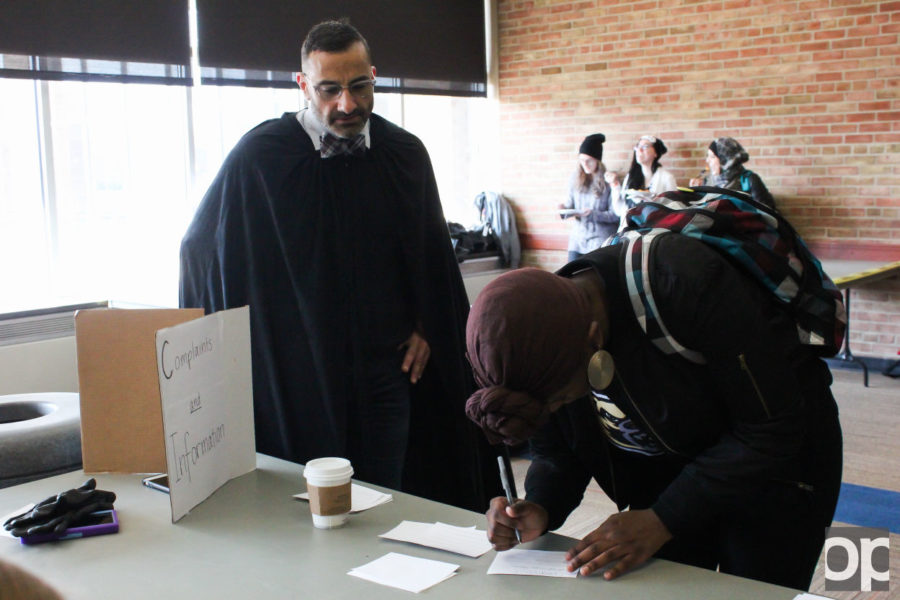 Participants were allowed to fill out complaint forms which the "dictators" at the event could choose to ignore.

On March 22, Oakland’s student chapter of the Society of Professional Journalists (SPJ) held its First Amendment Free Food Festival from 11:30 a.m. to 1 p.m. in the Fireside Lounge of the OC.

The premise of the event was that participants could get free food, but first had to symbolically surrender their First Amendment rights by signing a waiver.

This included their freedom of religion, expression, press, assembly and the right to petition, according to the Cornell University Law School website.

After signing their names, the suppression began. There were two “dictators,” including Vice President of Student Affairs Glenn McIntosh and Ed Nakfoor, assistant visiting professor of journalism. There were also “police officers” wearing badges and sunglasses, who roamed the room with all the power. All of these people were able to throw someone in “jail,” or a corner of the room.

Reasons for being put in jail ranged from someone texting to the fact that their brownie touched the chicken on their plate. There were even times when groups of friends were broken up, as they had no right to assemble. People had to spend a few minutes in “jail” and reflect upon what just happened.

Garry Gilbert, the director of the journalism program and advisor to SPJ, thought that this would be a fun event to raise awareness about what the First Amendment really means.

“Many citizens have no idea what these rights are and how they affect them,” he said.

SPJ’s secretary, Erica Marracco, a junior majoring in journalism, was involved in coordinating the event.

“Our First Amendment is important, but sometimes students don’t necessarily know what it entails for them,” she said. “For example, without the right to assemble, there wouldn’t be these different organizations at OU.”

Parris Page, a junior journalism major, was one of the students who participated and found the experience to be somewhat shocking.

“When you take away these rights, I wasn’t able to talk or defend myself,” she said. “It’s important to know that your voice is heard.”

Another goal of the event was to show just how privileged Americans are.

“Being a citizen in the United States, you should know that you’re very fortunate to have something like this that protects us,” Marracco said.

There are many countries who don’t have these rights.

“There’s a lot of censorship in China. It’s important for people to experience going to jail for something that may seem so trivial,” Marracco said.

Gilbert said SPJ has been at OU for three years. It is one of three student chapters in Michigan, according to the SPJ national website. It stated that one of its missions is to be watchful in the protection of the First Amendment rights.

Oakland’s chapter is devoted to improving and protecting journalism and free speech at OU, according to its GrizzOrgs page.

“SPJ is dedicated to the perpetuation of a free press so that citizens are well informed in order to make decisions regarding their lives, and their local, national and global communities,” according to OU’s Department of Communication and Journalism webpage.

The organization meets Wednesdays at noon in the Oakland Post newsroom. It is open to anyone committed to journalism, communication, media or the rights of the American people.

Check out SPJ’s website for more information or search for OU’s chapter on GrizzOrgs.