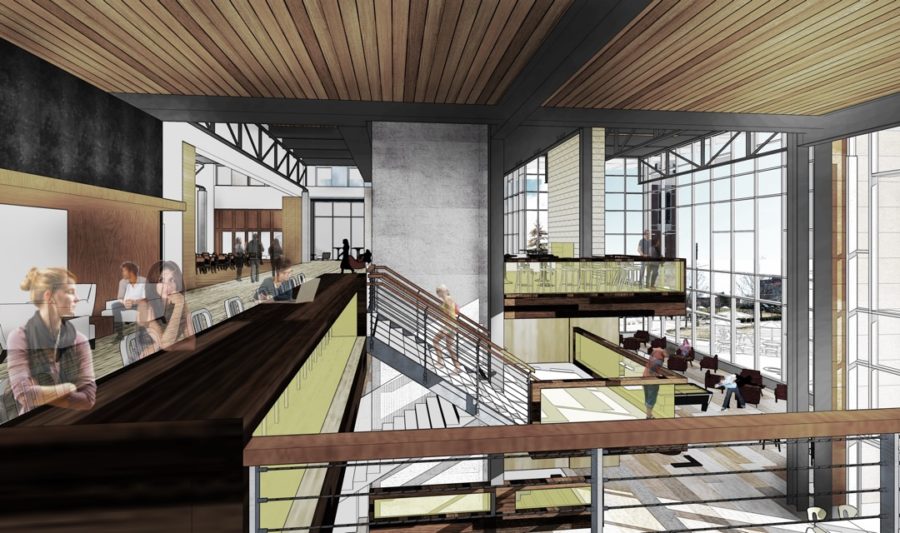 The building previously received three expansions in 1961, 1968 and 2003. The upcoming expansion will add 65,000 square feet and renovate existing spaces.

According to Terry Stollsteimer, associate vice president of Facilities Management, the project is intended to be finished in December 2018.

“We’re gonna move forward with the Oakland Center still being operational,” Stollsteimer said at the Aug. 8 Board of Trustees meeting. “We’re looking to phase the project, so we can allow the food service and students to have access to the building and to be able to do this project in a successful way, and also be able to move us forward as we move forward as a university.”

Along with a representative from architectural firm Workshop Architects, Stollsteimer presented a plan for the expansion at the meeting, which was approved unanimously.

Student committees have influenced the designs since the project’s inception five years ago, according to Vice President for Student Affairs Glenn McIntosh.

“I have had the opportunity to sit in and see a couple of different designs and see heavy student feedback change the design as it came to us, and this is kind of an end result of all the feedback that we’ve given,” said Cassie Hock, student liaison to the Board of Trustees and president of the Student Program Board.

Of the total costs, $40 million will come from bond proceeds, while the remaining $4 million will be paid by OU’s food service provider, Chartwells. This $4-million investment was part of a signing bonus for Chartwells’ renewed ten-year contract with the university. The Use and Finance Bi-Annual Reporting Form also lists an estimated $138 per-student impact on tuition for this project, which was applied to this fall’s tuition.

Architectural/engineering firms Integrated Design Solutions and Workshop Architects will be paid $3,281,000 for their work on the project.

In general, the expansion will push student activity toward the outer walls and move office spaces toward the center of the building, making student life more visible from the outside.

The exterior of the building will be largely made of glass, similar the Human Health Building and Engineering Center. Workshop Architects is looking into sun-shading devices to control heat gain on the interior while still creating bright, open spaces.

Currently, most of the ceilings in the OC are the same height. The renovations will include a tiered floor plan with higher ceilings to give the interior a more open atmosphere.

The basement of the OC is home to OU Student Congress, the Student Program Board, WXOU and The Oakland Post. By creating a visual connection between the basement and the ground floor, the renovation will reduce a sense of separation between these student organizations and the rest of the building. New meeting spaces and a reflection room are also planned for the basement.

On the ground level, the renovations will add tiered seating; create new study, leisure and meeting spaces; and alter the layout of the kitchens in the Pioneer Food Court. Although the food court’s exterior was recently renovated, the behind-the-scenes arrangements are inefficiently designed for Chartwells’ large-scale restaurant and catering services.

“The back house that nobody sees is sort of dysfunctional. It’s not sort of – it is dysfunctional,” Stollsteimer said. “And bottom line on this project, we are spending monies within the kitchen area, the backhouse areas, to make that more functional, make it more effective, make it more timely . . . It will also help out in terms of the staffing numbers. When you’re efficient behind the scenes, you don’t need as many staff.”

The expansion will also add a new entry on the north side of the building, alleviating safety and accessibility concerns that currently arise from interference with the loading dock.

Upstairs, there will be two multipurpose spaces built in addition to the existing ballroom. These new spaces can be used together for larger events or can host two separate events at once. They will be connected to each other via a pre-function lounge from which people can look down into the social spaces of the building.

When asked about the life of the building, Stollsteimer said another similarly sized expansion could be added to the OC down the road. He noted that, while structures like elevators and bathrooms will not need to be updated for a long time, other spaces may need renovation every 10-15 years.