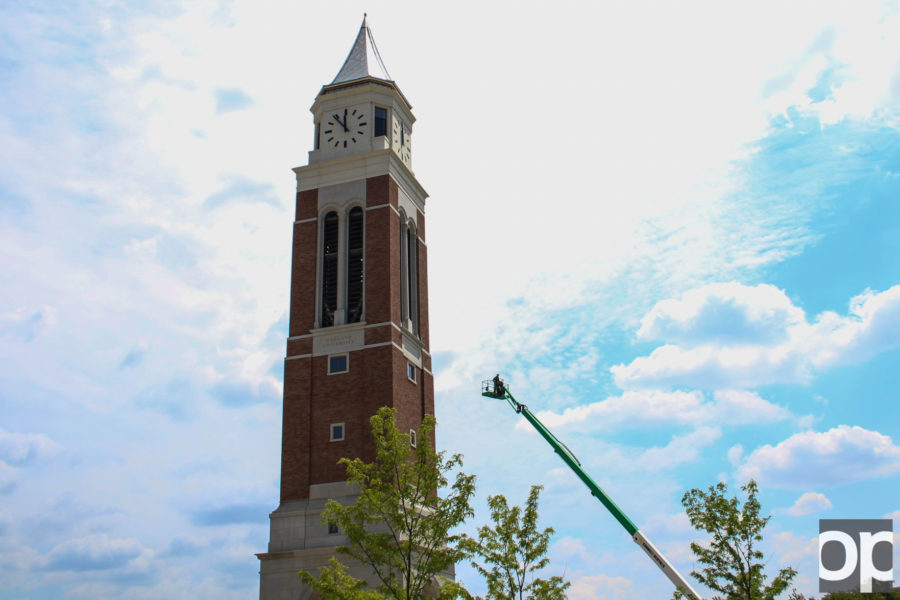 The minute hand of the Elliott Tower on the southwest side fell on June 22 and was replaced on July 20.

A bare face of the Elliott Tower stood visible for almost a month after a parent and daughter reported witnessing the minute hand falling off the tower on June 22. The hour hand was taken down following the incident for precautionary measures.

Men were spotted going up on a crane lift toward the clock tower on Wednesday, July 20 to replace the hands on the empty side and install safety devices on all sides to prevent similar incidents from occurring.

The Facilities Management Department, which resolves issues like this on campus, investigated the cause and determined that the gear inside the tower was broken, which usually automatically keeps the time consistent on all sides.

According to Terry Stollsteimer, associate vice president of Facilities Management, the clock tower was reset manually four times within six weeks prior to the incident, each time after it was reported that the clocks were not in sync. It was not known at the time, but the gear was inoperable, which led to a chain of events resulting in the minute hand falling and being damaged.

Replacement took about four weeks because custom manufacturing work was required, which left the southwest face of the clock tower empty in the meantime.

“Honestly, I wasn’t surprised. I just expected it to happen at some point before I graduated,” said Max Pelkey, senior at Oakland University. “At least they fixed it before the fall semester started because I honestly thought it was going to take longer than it did.”

Although the clock tower’s warranty paid for some of the work, fixing the gear and adding safety devices cost an estimated $12,000 from Facilities Management’s repair budget, which is funded through the university’s general budget.

Since being built in summer 2014 through a donation from Hugh and Nancy Elliott, the clock tower has been a popular attraction on campus with its 151-foot-tall structure and 49 carillon bells ringing every 15 minutes.